Calvert Studios' Stage Manager, Bill Reider, announced an Indiegogo campaign to fund Reel Brew, a craft brewery that aims to support and promote the Los Angeles film and TV industry. The campaign is looking to raise a minimum of $25,000 to begin contract brewing operations, but hopes to raise as much as $75,000 to push towards the long-term goal of opening a brick and mortar operation in Van Nuys, California.
Reel Brew is meant to celebrate the real crews that are the backbone of the film and TV industry in Los Angeles. With runaway film production continuously increasing in the last decade, Bill saw a need to find an innovative way to both celebrate the work that crews accomplish and fight for productions to remain in LA. "As a stage manager, I work closely with the crews every day, and I know first-hand the negative effects of runaway production on good, hard-working men and women. The original intent of Reel Brew was as a gift for crews at the end of a season, but I soon realized that the brew could serve as an important marketing tool in the fight to keep good film and TV jobs in LA."
A portion of the proceeds derived from Reel Brew will go to taking action to preserve and increase film and tax credits in California. Future action will include: 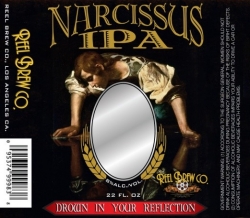 ® Social media campaigns to raise awareness
® Lobby California elected officials to maintain and increase tax credits for film and TV production
® Participate in local and statewide events, disseminating pertinent statistics and discussing the negative impact of runaway production on Californians
® Hold town-hall and live events highlighting the disastrous effect the runaway film production has on the California economy
® Highlight stories of affected crewmembers
The campaign includes ten benefit levels, from $20 (for a limited edition Reel Brew pint) to $5,000 (includes a VIP party for 40 guests, a custom beer for the party, space on the FOUNDER'S WALL when the brick and mortar location opens, REEL BREW for life, and more).
Reel Brew recently hosted a launch party in early July that brought together over 100 supporters and featured beer from a well-known San Diego area brewery, the contract brewery that will provide the first batches of Reel Brew at the conclusion of the Indiegogo campaign. The campaign is currently live and anyone wishing to contribute to the campaign can do so here.
For more information, please contact:
www.facebook.com/reelbrewery