Masters FX to Unleash New Vampires, Aliens, and Victims of the "S

Masters FX to Unleash New Vampires, Aliens, and Victims of the "Sudden Departure," During "Summer of Monster Love 2014"

"Freshly-Made Monsters" created and produced by award-winning creative character effects company MASTERSFX will be unleashed during the "Summer of Monster Love 2014." The creatures will be featured within three high-profile TV series. This array of bloody and slimy new creatures will include vampires and makeup FX featured in the HBO series "True Blood" (Season 7, debuting June 22,) an assortment of aliens in the Dreamworks/TNT invasion series "Falling Skies" (Season 4, also debuting June 22,) and special FX which will also be seen (or unseen) in HBO's new drama series "The Leftovers" (which debuts June 29.)

MASTERSFX is continuing its special form of "bloody arts" on HBO's seventh and final season of "True Blood" - having produced the makeup FX and prosthetics for the series since its debut in 2008. "We've been on 'True Blood' starting with the pilot," says MASTERSFX Coordinator Mark Viniello. "And since then, we have produced over 500 vampire bites, created more than 400 pairs of fangs, and spilled more gallons of blood than I can calculate."

MASTERSFX followed "True Blood" creator and executive producer Alan Ball from "Six Feet Under," where the FX shop created the "dead" of another type -humans. The company won an Emmy Award in 2002 for its work on that multi award-winning series. Now well-past that show's conclusion, and in the final season of another, MASTERSFX President/Founder Todd Masters reflects on the numerous corpses left in his wake. "I have mixed feelings about the final season of 'True Blood,'" he laments. "We're not quite finished yet, but it is sad to see the end of all these great characters and fun story lines. 'True Blood' redefined the modern vampire, and we were extremely happy to have played a part in its bloody glory."

MASTERSFX will continue to victimize the fictitious citizens of Bon Temps, Louisiana, for a few more weeks, as the show winds downs filming. "And then, just maybe, we can try and get some of these blood stains out of our clothes," Masters concludes.

For Season 4 of "Falling Skies", the Steven Spielberg/DreamWorks Television series returning this summer on TNT, MASTERSFX faced a completely different monster challenge. The studio has created armies of practical alien characters on this series since its 2011 launch - and has used the challenges of a weekly, "Alien Invasion" series to evolve their classic monster techniques, helping the studio ultimately reinvent its FX process. 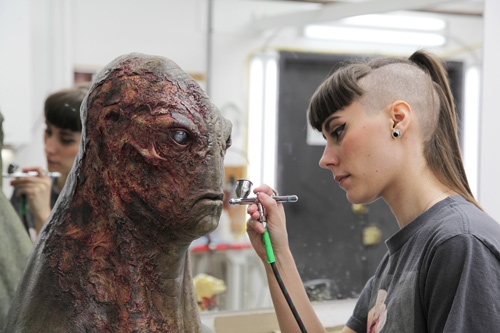 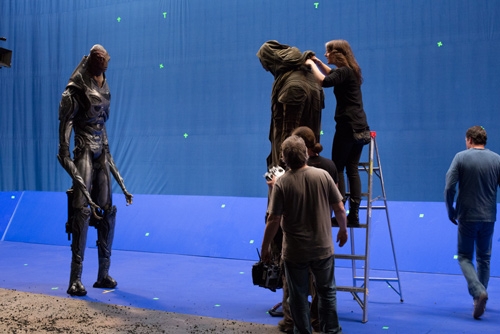 With the many different types of alien species that MASTERSFX has enabled to invade Earth over the past three seasons, the company had to change their FX approach to keep up. "We love the look and feel of physical creatures on set, interacting with cast and sets," Masters explains, "But they can often be too unwieldy and difficult to evoke dramatic emotions from. At the same time, computer rendered creatures have their advantages also, but often aren't as persuasive as creatures who can physically appear and act on set." 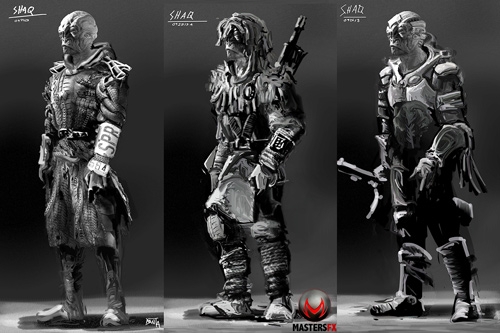 For the upcoming Season 4 of "Falling Skies," MASTERSFX is implementing both practical and digital FX to present various creatures, including members of the alien "Volm" warrior race - including the most popular character added to "Falling Skies" during Season 3, "Cochise," portrayed by actor Doug Jones. Jones' on-set practical alien "Cochise" appears nearly complete when filming, so other actors can interact with him and respond directly to his life form, naturally. "His alien portrayal can physically be part of the scene, can be directed, and can interact with the other performers, as well as with the sets and the props organically. In this manner, he appears as a true cast member of the show," adds Johnathan Banta, Senior VFX Supervisor at MASTERSFX. 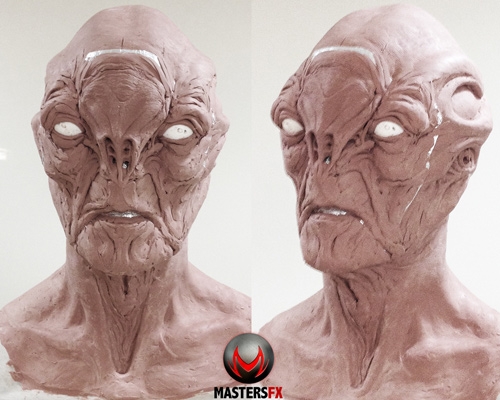 As for the new HBO drama series "The Leftovers," which focuses on the residents of the fictional town of Mapleton, whose preconceptions are shattered in the wake of a global event dubbed "The Sudden Departure," MASTERSFX remains tight-lipped. "Our role on this new series is to help fill-in-the-blanks," says Nicholas Podbrey, MASTERSFX Producer, quite slyly. "In the world of 'The Leftovers,' 2% of the population departed. So, we're helping tell this story through very subtle special effects that audiences may or may not even notice."

ABOUT "TRUE BLOOD:"
"True Blood" returns for its ten-episode, seventh and final season Sunday, June 22 (9:00-10:00 p.m. ET/PT), exclusively on HBO, followed by other new episodes on subsequent Sundays at the same time. Mixing romance, suspense, mystery and humor, the series takes place in a world where vampires and humans co-exist, after vampires have come out of the coffin, thanks to the invention of mass-produced synthetic blood that means they no longer need humans as a nutritional source. The series follows waitress and part-faerie Sookie Stackhouse (Anna Paquin), who can hear people's thoughts, and vampires Bill Compton (Stephen Moyer) and Eric Northman (Alexander Skarsg®rd). Created by Alan Ball, the show is based on the bestselling Sookie Stackhouse novels by Charlaine Harris. 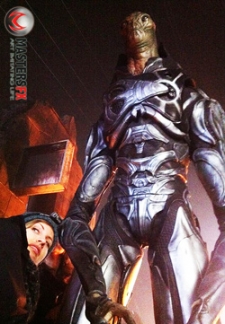 ABOUT "FALLING SKIES:"
Airing on TNT, "Falling Skies" is a science fiction, post-apocalyptic dramatic television series created by Robert Rodat and executive produced by Steven Spielberg. The series stars Noah Wyle as Tom Mason, a former Boston University history professor who becomes the second-in-command of the 2nd Massachusetts Militia Regiment, a group of civilians and fighters fleeing post-apocalyptic Boston following an alien invasion that devastated the planet six months before the start of Season One. "Falling Skies" is produced by DreamWorks Television. The series premiered on June 19, 2011.

ABOUT "THE LEFTOVERS:"
Debuting on HBO on June 29, 2014, "The Leftovers" is a new drama series created by Damon Lindelof and Tom Perrotta, based on Perrotta's novel of the same name. The series stars Justin Theroux, Amy Brenneman, Christopher Eccleston, and Liv Tyler. Lindelof and Perrotta executive produce, along with Peter Berg and Sarah Aubrey. Lindelof serves as showrunner. The series is produced for HBO by White Rabbit in association with Warner Bros. Television. "The Leftovers" takes place in the wake of a global event dubbed "The Sudden Departure." The series centers on the lives of those people who have been left behind in a suburban community, after 2% of the world's population vanished.

ABOUT MASTERSFX:
Founded in 1987 by Emmy Award winner Todd Masters, MASTERSFX is a multi- award winning character and special FX house with studios in Vancouver, British Colombia, and Los Angeles. MASTERSFX's creative teams produce a unique blend of practical and digital makeup and special FX, prosthetics and animatronics for hundreds of hit feature films, TV shows, and commercials.
Included among the TV projects to which MASTERSFX has contributed its work are "True Blood," "Falling Skies," "The Leftovers," "Almost Human," "Stargate: Atlantis," "Dexter," "Fringe" and "Eureka." Among the company's film credits are "RoboCop," "The Day the Earth Stood Still," "The Haunting in Connecticut," "Star Trek: First Contact," "Tales from the Crypt," "Nightmare on Elm Street 5," "The Horse Whisperer," "Slither," "Snakes on a Plane," "Predator," "Poltergeist II," "Buffy the Vampire Slayer," "Look Who's Talking," "Mortal Kombat," and many more.
Todd Masters won an Emmy Award in 2003 for the 2001/2002 Season of "Six Feet Under" in the category "Best Special Effects Makeup." MASTERSFX is also the winner of a 2006 "Saturn Award" for "Best MakeUp FX" for its work on the film "Slither." Please see www.mastersfx.com