Mac-based system provides an integrated solution for dailies processing, editorial and more in a mobile package.

Advantage Video Systems has introduced 4Kase, a new mobile, post-production and editing system for use on-set. The groundbreaking workflow solution, first demonstrated at NAB, was formally launched at the recent Cine Gear Expo in Hollywood where it drew intense interest from production and post-production professionals. 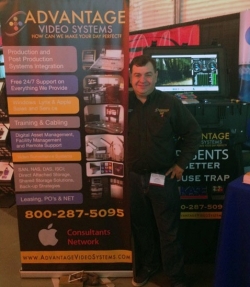 Based on a high-performance Mac Pro workstation, 4Kase offers the ability to input and output 4K data from most popular digital cinema cameras and perform such tasks as dailies processing, media back-up, color management and editing-all from a fully integrated system small enough to fit in the trunk of a car.

4Kase is unlike any on-set dailies system currently on the market. "We've built a better mousetrap," says Advantage Video Systems principal Jeffrey Stansfield. "4Kase replaces rack-mount DIT carts that are bulky, costly to ship and difficult to operate. It is smaller, faster and lighter, and can be configured to meet the needs of individual production workflows. 4Kase provides a streamlined workflow that carries the creative intent of directors and DPs from the set through final post."

Attendees at Cine Gear were effusive in their praise for the new system. Asylum Entertainment's David Cortus called it "one of the most remarkable innovations at the show!" Paul Rice, Media Producers International, echoed those sentiments, saying, "This is exactly what this industry is been looking for."

4Kase includes a 2014 Apple Mac Pro workstation capable of running most current software for dailies processing, color management, media back-up and editorial. It supports the latest cameras made by Sony, Arri, RED, Canon and Black Magic Design. Key features include a built-in high resolution monitor, up to 16 TB of onboard storage, two LTO-6 drives, SAS RAID-5, a multi-cam reader, Thunderbolt expansion slots, and cooling and power management tools. All of that is custom fitted into a rugged transport case designed to stand-up to the rigors of location production, and yet small and light enough to be checked as airline luggage.