Wearing vibrant orange shoes and trendy glasses, Brian Streem looks like he could launch himself and hover over the crowd to get an unforgettable shot. Fantasy aside, young filmmaker Streem, Director of Business Development, and his partners, Jason Goodman, CEO, & Jeff Brink, Founder/Director of Flight Operations at AreoCine, have launched the next best thing: a micro aerial cinematography company that moves professional cinema cameras, including 3-D, in a way no one ever had ever done before, without sacrificing quality.

The founders have traveled the world to source the the best parts for their aerial equipment and are now operating two drones. The drones, traveling under carnet abroad, are available for rent worldwide along with a 3-person team: pilot, camera operator and aircraft technician. 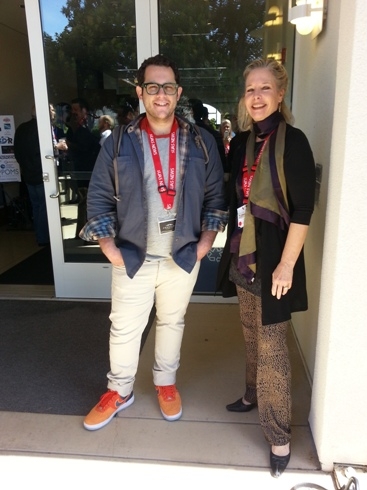 We connected with Streem at the sUSB Expo (Small Unmanned Systems Business Expo aka the Silicon Valley Drone Show) in San Francisco last week and talked with him about the new venture introduced to the British Film Institute in March of 2014. AeroCine is using heavy lift micro copters and RED EPIC cameras to get extended range and high quality. They are the first in the world to fly stereoscopic RED EPIC cameras using the most powerful micro hexacopter available.

According to Streem, the key to success is the remote pilot. With tens of thousands of dollars at risk in the flying equipment, an experienced pilot controlling the drone is the difference between a beautiful shot, safely captured and a large insurance claim.

AeroCine, by definition, is a global venture due to the lack of FAA regulations on commercial use of drones in the U.S. They have taken their aerial cameras to France, Slovenia, U.A.E., Sweden and Ukraine so far for projects and using 2 ATA Carnets they have been able to clear customs without paying import duties and taxes. Original footage shot at Chernobyl promises to deliver a perspective on the area and nuclear accident that has yet to be seen. The AeroCine team is poised to produce a documentary film from this revolutionary footage.