MagicSnow created a large scale snow spectacle at Nokia Theatre at L.A. Live this past weekend for The Radio Disney Music Awards, airing SUNDAY, APRIL 27 (8:00 p.m., ET/PT). The Los Angeles based special effects firm was brought on by Disney to fill the 7,100 seat auditorium with a show-stopping snowstorm during a live performance of 'Let It Go' from Disney's 'Frozen.' Video of the performance can be viewed here!

The music-filled broadcast featured appearances from Justin Timberlake, Katy Perry, and Ariana Grande, along with performances by talented teenage fans. The show is billed by Disney as the only music awards show dedicated to kids & families. 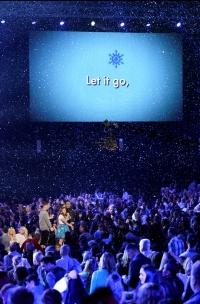 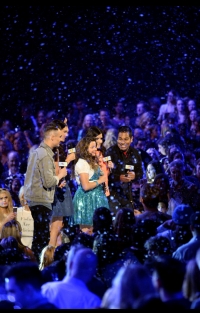 MagicSnow is the go-to resource for snow effects on television productions, live events and snow themed attractions; creating realistic fake snow effects in any environment, indoors or out.

Latest projects include creating an elaborate snow themed date for ABC's 'The Bachelor,' Universal Studios Theme Park and holiday snow shows on board the entire fleet of Princess Cruises. The RMDA's are produced for The Disney Channel by Michael Levitt productions with Simon Miles, lighting designer.