The film is being executive produced by Jay Silverman, produced by Keefe Kaupanger-Swacker and Will Newman, and co-produced by Bethany Cerrona for Jay Silverman Productions. Casting is by Nick Anderson. Production on "The Secret Place" took place from January through February, at various locations in and around Los Angeles and Moab, Utah. 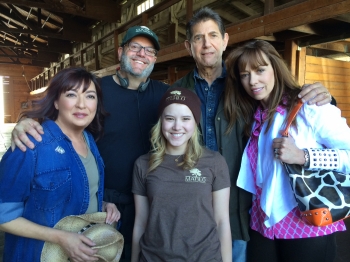 Based on a powerful true story, "The Secret Place" recounts the journey of Hannah Green, a 15-year-old girl who is victimized by an online predator. Unable to cope with the resulting trauma, Hannah's behavior becomes increasingly self-destructive until her family is left with no choice but to send her to a treatment center for troubled youth. Hannah's transition is turbulent, and she refuses to cooperate, until she finds a kindred spirit with its most unlikely patient. With the help of her mentors and the horse she's formed a bond with, Hannah realizes painful truths about her past, and begins to face her uncertain future.

Said Silverman, "To tell a story as sensitive and emotional as this has moved me beyond words. This film is based on a story that's deeply personal to me. It shows how even the most vulnerable can find the strength to overcome unthinkable tragedies, and pays tribute to the people who dedicate themselves to helping them find that strength."

Previously, Silverman was Executive Producer and Co-Creator of the A&E TV series "The Cleaner." He has also produced over 40 episodes of "One on One with Cathy Hughes" for the TV One Network, which featured celebrities such as Denzel Washington, Jamie Foxx, Aretha Franklin, and Beyonc®, to name a few. Silverman was also the director of the docu-drama "The Secret Things of God" for 20th Century Fox. For the past 38 years, he has been a highly in-demand commercial director, and his past clients have included Pepsi, McDonalds, and Disney.