"Major" the lion does the MGM 90th anniversary paw-printing 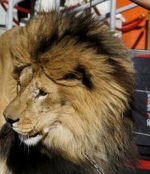 Steve Martins Working Wildlife is proud to announce that our Lion "Major" has been selected to put his paw prints in cement in front of The Grauman's Chinese Theatre. "Major" aka "Leo" for MGM, was part of the 90th Anniversary Celebrations for MGM and Fox. On 1/22/14, Major AKA Leo appeared in front of the Chinese Theatre in Hollywood, CA to add his footprints to the "Walk of fame".

Major AKA Leo, a 13 year old Male African Lion, raised since a cub by Steve Martin and is quite a popular guy these days. In addition to his MGM footprints, he has filmed commercials for Food Lion Stores, an appearance in the remake of The Three Stooges, promoting Camacho Auto Sales and lots more. Major (Leo for MGM) loves to work. He lights up in front of a camera, such a ham.

He is still not too busy to be in your next production.

You can see pictures of Major on our website www.workingwildlife.com along with our other Animals available for work.