Our team at Brockett's Film Fauna wants to share with you some of the fun projects that we have been working on recently.

Every year we donate our time and animals to an annual event at The Los Angeles Natural History Museum. The event is called RADD, which stands for Reptile and Amphibian appreciation day. The turn out is always great and we help spark an interest and passion for many unique species in children and adults. Our displays include a variety of venomous reptiles including a king cobra and gila monsters. Guests love being able to hold and take photographs with our smallest alligator Nibbler. Nibbler the american alligator came to us the same way we acquire most of our animals, through the Department of Fish and Wildlife. He was someone illegal pet and the department confiscated him, then called us to place him. We have ALL of the appropriate legal permits required to keep and work the diverse species in the Film Fauna family. At the RADD event we also do educational venomous snake handling demonstrations. We show the public how we safely handle venomous species such as; Western diamondback rattlesnakes, cotton-mouths, and gila monster lizards with our special reptile handling tools. We particularly enjoy a question and answer period with the public were we can debunk some popular misconceptions about the animals.

We have been busy with television and film work with our animals as well as just donating our time to causes we care about. We were very proud of our bobcat working on the Fox show Bones! The bobcat can be seen in the season 9 episode 2 "The Cheat In The Retreat". Another episode of Bones featured a hawk that we trained to fly and land with a fake human finger! You can see the amazing hawk work in season 9 episode 5 "The Lady On The List". We have also been busy working on The Mentalist with lots of pigeons, goats, chickens, and dogs. 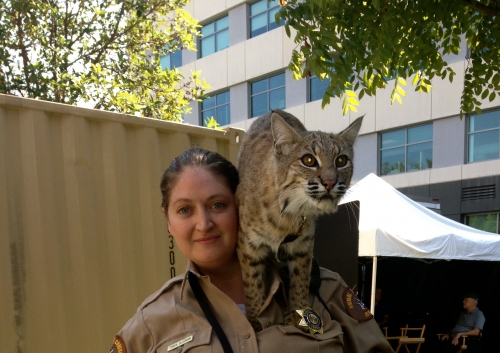 Our lovely white pigeons have been working with the illusionist David Blaine. Remember our team of white homing pigeons doubles for doves and they can be released all over the greater Los Angeles area. They are great for film work, but also for weddings and funerals.

Our team had a great time doing night shoots for an upcoming film that featured our largest alligator and our very popular iguana named Holly Pino. It was a party scene and our iguana was the perfect party guest hanging out with lots of kids touching him. The alligator had the pleasure of swimming in a pool during one of the scenes, and as always the crew was very impressed with our safety techniques. The director even personally thanked the trainer that worked in the pool with the alligator.

Some of our other recent work has varied from location rattlesnake safety to working with catfish. From German shepherds on an indie film to snakes in Hollywood at a halloween party. We provided animals recently for The Tonight Show with Jay Leno. Our large reticulated python and a tiger cub were featured on stage with Jay and animal enthusiast Dave Salmoni.

We hope that you think of us for any upcoming project! We work with ALL different types of animals and would like to work with you!
Look for us on FACEBOOK at Brockett's Film Fauna or visit our website or email us at Brockettsfilmfauna@earthlink.net