The Los Angeles Latino International Film Festival (LALIFF) concluded its 16th event with the US premiere of one of Mexico's most successful films, "NOSOTROS LOS NOBLES," directed, co-written and co-produced by Gaz Alazraki ("Volver, Volver", and "Respete la Senales"). The Closing Night Gala Celebration was held on Monday, October 14th, 2013 at the Orpheum Theatre in Downtown, Los Angeles.

LALIFF Executive Director, Programmer and Co-Founder Marlene Dermer quoted Abraham Lincoln saying "Always bear in mind that your own resolution to succeed is more important than any other." 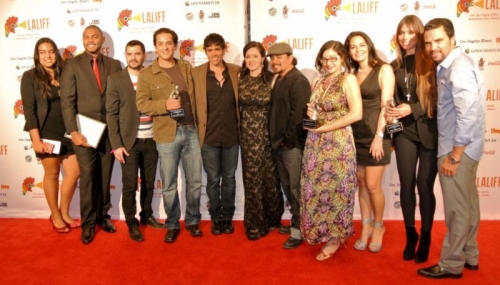 The festival featured 62 films, including 28 features, 11 documentaries and 23 shorts. In addition to the film screenings, the festival hosted filmmaker panels on Saturday, October 12thand Sunday, October 13th with Closing Night Gala after-party presented by Cine Latino. LALIFF's highlights included, Pablo Ferro, 16th GABI Lifetime Achievement Award in recognition to his contribution to the entertainment industry in the Hispanic filmmaking community; more than 80 film and television shows, during his 40-year career. "The greatest feeling in the world is when something has been created that no one has ever seen before. And you're the one who is seeing it for the first time." said Pablo Ferro

About LALIFF:
The Los Angeles Latino International Film Festival (LALIFF) was founded in 1997 by producer, director, actor and activist Edward James Olmos and independent producer Marlene Dermer. LALIFF is a non-profit 501c (3) organization with the mission to support the development and exhibition of diverse visions by Latino filmmakers. To serve as a springboard and catalyst for the promotion of Latin films and filmmakers in the industry locally, nationally & internationally. To develop audiences for such films and in the process bring awareness of the richness and diversity of Latin cultures, artistry and countries through film, the most powerful medium in the world.

A competitive festival with prizes, LALIFF serves as a venue where Latino filmmakers come together with industry buyers and distributors. LALIFF also offers industry workshops, panels, labs, networking receptions, educational programs, and hosts some of the best Galas in tinsel town.