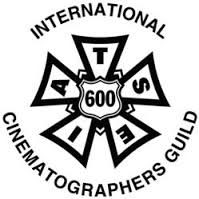 Four major Hollywood corporations will be presenting awards at a special luncheon organized by the International Cinematographers Guild (ICG, IATSE Local 600) at the American Society of Cinematographers Clubhouse in Hollywood on Friday, September 27 as part of the celebrations of the Guild's 17th annual Emerging Cinematographer Awards (ECA).

Weingartner, chairman of the ICG National Training Committee, is a Director of Photography, Visual Effects Supervisor and Stereographer. He has always been involved in technical innovation and the application of technology from one field to another, whether it was applying rock 'n roll or sailboat tech to rigging IMAX cameras or using theatrical lighting fixtures and controls in lighting motion pictures.

Tapley is the editor of In Contention, part of HitFix.com, where he covers film awards. An important part of his work is recognizing below-the-line accomplishments. He actually started out with a BFA in Filmmaking and a concentration in screenwriting from the University of North Carolina School of the Arts but soon turned to journalism after going back to school to earn an MA in journalism at USC.

Macat has recently mentored students at Pepperdine University, the AFI, NYU, Chapman College and Scottsdale Community College and taught a seminar at Disney Animation. Total domestic box office of films that he has photographed has reached $1.6 billion. His first film was the hit Home Alone. He went on to shoot eight films that opened in the #1 box office position in the U.S.

Professor Carbonara has a long list of attainments in the field of education, serving in a variety of capacities on state, national and international committees and panels for the Federal Communications Commission, the Society of Motion Picture and Television Engineers and many other prominent organizations. He is a long time member of the American Society of Lighting Designers and is currently Director of the Digital Communications Technologies project at Baylor University.

Steven Poster, president of the ICG, said, "These gentlemen represent the very highest achievements in their fields, be it cinematography, education or journalism, and Mark Weingarten has led the way in upgrading members' skills as new cameras and other equipment come on the market."

Honorees of the Emerging Cinematographer Awards, to be held at the Directors Guild of America Theater in Los Angeles on Sunday, September 29, will also be recognized at the luncheon. These awards honor ten short films photographed by up-and-coming Guild members who have not yet reached the category of Cinematographer. The films were selected from almost 100 submitted.

Sponsors of the New York ECA premiere, to be held at the School of Visual Arts on October 20, include LVR, Hello World Communications and Available Light.

About the International Cinematographers Guild
The International Cinematographers Guild (IATSE Local 600) represents more than 7,000 members who work in film, television and commercials as Directors of Photography, Camera Operators, Visual Effects Supervisors, Still Photographers, Camera Assistants, Film Loaders, all members of camera crews and Publicists. The first cinematographers union was established in New York in 1926, followed by unions in Los Angeles and Chicago, but it wasn't until 1996 that Local 600 was born as a national guild. ICG's ongoing activities include the Emerging Cinematographer Awards and the Publicists Awards Luncheon. The Guild also publishes the award-winning ICG Magazine. www.cameraguild.com.