Peters and Athena Studios are actively involved in preproduction on a 90-minute, stop-motion animated motion picture based on Auntie Claus. Several heavyweight animation industry figures have already committed to the production, including:

Pete Kozachik, Director of Photography: Kozachik has served as DP on Coraline, The Corpse Bride, and The Nightmare Before Christmas. He was involved with the Visual Effects on Star Wars Episode II, Ghostbusters 2, Starship Troopers, Star Trek IV, and Robocop 2 and 3.

Tom Proost, Art Director: Proost has served as Art Director on Coraline, and worked in Visual Effects for Galaxy Quest, Star Wars: Episode II, The Mummy, AI: Artificial Intelligence, and The Matrix 2 and 3.

Brice Parker, Producer: Parker is a Pixar Animation Studios and ILM alum and was involved with Visual Effects management on the Jurassic Park and The Matrix film franchises.

Tim Taylor, Camera and Lighting: Taylor ran camera for Coraline and Frankenweenie, and worked in Visual Effects for Con Air and Back to the Future 2.

Regarding today's announcement, Peters said, "'Auntie Claus has been a favorite of my family for years. It has a very appealing story and a strong message. We reached out to Elise Primavera, and were fortunate enough to negotiate a solid deal with her for the film rights. We couldn't be more excited to have been bestowed with the honor of turning her wondrous book into a perennial Christmas-holiday classic."

Adds Parker, "We chose stop motion as the format for this new, upcoming film because it has a fantastic look and feel that we knew would be perfect for telling this story. It can also be extremely cost-effective to produce stop-motion when it's managed properly, and the box office returns of a four-quadrant Christmas film are indisputable. We think Auntie Claus is ideally suited to perform to those expectations."

Athena Studios has already begun a treatment for the book as well as development on character design and animation tests. Studio executives are currently interviewing potential directors for the film, as well as developing a package for funding and distribution.

Author Elise Primavera said, "Auntie Claus was first conceived in the mid '90's, while I was living in New York City. From the moment I first had the idea for the book, I thought it would make a wonderful holiday movie. So when Jon Peters from Athena Studios contacted me at Christmastime last year, and said he loved the story and wanted to adapt it, I was thrilled. I always thought that the visuals of the North Pole, Auntie Claus penthouse at the Bing Cherry Hotel, her two butler dogs, and the flying elevator scenes would be best represented within the context of an animated film. I was further delighted to learn from Jon that he wanted to make a stop-motion animation picture. I think this is the medium that Auntie Claus was always meant for. I believe the story has tre-mendous potential to become a Christmastime movie that every family with young children will want to see for years to come!" 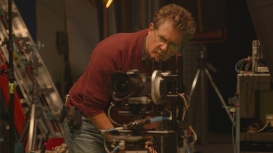 ABOUT AUNTIE CLAUS: THE MOVIE
Originally released in 1999 by Harcourt, Inc., Auntie Claus, by author Elise Primavera, is the holiday story of 11-year old Sophie, a girl who is a byproduct of an entitled generation. For Sophie, the true meaning of the Christmas holiday comes from a store and arrives wrapped with a bow. One Christmas, all of that changes when her mysterious Aunt arrives to reveal Sophie's true heritage - Santa is very real, and Sophie's one of the family -- and she's whisked off on a grand adventure to the North Pole and a mission to rescue the holiday for children everywhere.

Auntie Claus is the first in a series of three books by Elise Primavera depicting the adventures of Sophie and her Great Aunt "Auntie Claus." For more information, please see: http://www.eliseprimavera.com/books/auntie-claus

ABOUT ATHENA STUDIOS
Athena Studios was launched as a full service production facility for companies seeking to produce their own videos or shoot a feature film. In addition to producing outside projects, Athena Studios, in 2013, also began to develop its own original content for motion pictures, television, web and multi-media presentations.