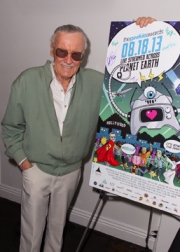 Thunderous applause echoed throughout The Avalon Hollywood as Stan Lee accepted his Lifetime Achievement Award, presented to him by Seth Green, at the inaugural Geekie Awards. The biggest surprise came when Stan ended up singing his very own Ode to Geeks (in the tune of "Yankee Doodle"). There were many surprise awards given to kick off the show, such as "Freaks & Geeks" alumns, Samm Levine, Natasha Melnick, and Sarah Hagan, presenting the Geek of the Year award to Nathan Fillion. Accepting on Fillion's behalf, The People's Nerd and Super Bowl commercial make-out king, Jesse Heiman, who gave his BEST Fillion impression. Thrilling Adventure Hour's, Marc Evan Jackson as Sparks Nevada...Marshall on Mars, presented the Geek Cred Award to the NASA JPL Mars Curiosity Rover team in attendance. There was even a special performance by Iron Shield Arms, LLC, L.E.A.G.U.E. of Steam, Andre Meadows, and George Shaw.

The Geekie Awards was created by über geek girl, Kristen Nedopak, in order to celebrate the most talented independent creators, artists, and filmmakers in the geek genre. This awards show stands alone as one that showcased the multitude of genres within the geek world to an international audience of industry leaders and fans who may not have otherwise discover it.

And The Geekie went to:

About The Avalon Hollywood
In 2002 the original Hollywood Playhouse was transformed by a state-of-the-art facelift; orchestrated at the hands of owner John Lyons. Without compromising the Spanish Colonial architecture of this historic space, Avalon was born and has grown into one of the most prestigious venues for live performances & events including The Beatles' first west coast performance, first broadcast of the American Music Awards, The Rolling Stones, Nirvana, Madonna, Jerry Lewis, James Brown, Frank Sinatra, Snoop Dogg, Justin Timberlake and the Black Eyed Peas, to name a few.

Additional information about The Avalon Hollywood is available at: http://avalonhollywood.com/

About The Geekie Awards
The 2013 Geekie Awards presents the first-ever live streamed geek-genre award show featuring the best indie-created short films, web series, comic books, artists, designers, toy/game makers and more across 9 major categories. The multi-camera live streaming / online broadcast will reach an international audience of millions and celebrate any and every genre from Sci-Fi to Fantasy to Steampunk, Horror, Anime, and more. 'The Geekie Awards' is a registered trademark of Nedopak Productions, LLC.