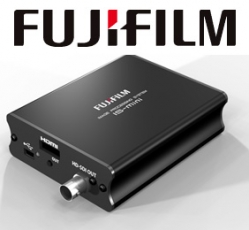 The IS-mini is a small hardware device that takes incoming HD-SDI digital camera moving picture video and converts the color information via two sets of 1D LUTs and 3D LUTs to outputs of both HS-SDI and HDMI connections - all in record time while still delivering high quality imaging. The IS-mini is an extension of the technologies first introduced through the CCBOXX (Image Processing System IS-100), and is designed to work with the CCBOXX by extending the abilities to have accurately profiled production monitors and remote color adjustment of live digital images during movie and television productions. Together, they form a powerful on-set color management system.

By use of a new dedicated software application, the IS-mini can also operate independently of the CCBOXX to create monitor calibrations and apply them to almost any kind of production monitor. Because of the built-in Ethernet connection, multiple IS-mini units can be assembled into a powerful array for multi-monitor/multi-camera image control and very precise color matching.

The CCBOXX is an ACES based on-set color management solution with extraordinary precision and flexibility. With the CCBOXX, cameras can be calibrated instantly on-site, while the monitors' calibrations are fully automated, eliminating the need for specialized skills. The CCBOXX is so effective that it has recently been used on two US-based feature length movies and several commercials.

At the show, the CCBOXX will be demonstrated with the AJA Ki Pro Mini, a compact, tapeless video device that records high-quality files onto computer-friendly media. The Ki Pro Mini is designed to fast track footage from camera to editorial; and at the show, it will be used to record actual video files with the color correction applied. The Ki Pro Mini can be fully controlled by CCBOXX, and it enables not only automatic recording but also playback and search functions through an iPad™ controller. The Ki Pro Mini is made by AJA Video Systems, a manufacturer of digital video interface, conversion and desktop solutions for the professional broadcast and post-production markets.

The IS-mini and CCBOXX are designed to be used by colorists, digital imaging technicians, editors, VFX providers, and directors of photography.

In addition to demonstrations of the IS-mini and CCBOXX, Fujifilm will have Dean Cundey, ASC in-person at its booth, for Q&As, autographs and demonstrations on Tuesday, April 9. Cundey grew up in Alhambra, California, and studied architecture and cinema, and was also taught by famous cameraman James Wong Howe at the University of California, Los Angeles. During his prolific career that began during the late 1960s, he has earned an Academy Award nomination and Outstanding Achievement Award nominations from the American Society of Cinematographers, and also won an Emmy. Known for his often striking photography, and for his expert use of a fluid prowling camera, one of the first-ever uses of what became known as a Steadicam, his body of work spans a great variety of genres. Most recently, he has been working on a film tentatively titled, Something Whispered, starring Cuba Gooding, Jr., and directed by Peter Cousens, and executive produced by Michael Goodin, Peter Cousens and Cuba Gooding, Jr.

"We are proud to introduce and demonstrate the IS-mini, grounded in Fujifilm's award-winning technology for motion picture film, as well as its knowledge and experience with color," said James Hirano, deputy general manager and technical director, FUJIFILM North America Corporation. "Also, having a cinematographer of Dean Cundey's caliber at our booth is an honor, and will be a genuine treat for our visitors."

To learn more about Fujifilm's products for the motion picture and broadcast industries, please visit: http://www.fujifilm.com/products/motion_picture/.

FUJIFILM Holdings Corporation, Tokyo, Japan, brings continuous innovation and leading-edge products to a broad spectrum of industries, including electronic imaging, digital printing equipment, medical systems, life sciences, graphic arts, flat panel display materials, and office products, based on a vast portfolio of digital, optical, fine chemical and thin film coating technologies. The company was among the top 10 companies around the world granted U.S. patents in 2011, and in the year ended March 31, 2012, had global revenues of $27.8 billion*. Fujifilm is committed to environmental stewardship and good corporate citizenship. For more information, please visit www.fujifilmholdings.com.
*At an exchange rate of 79 yen to the dollar.

All product and company names herein may be trademarks of their registered owners.