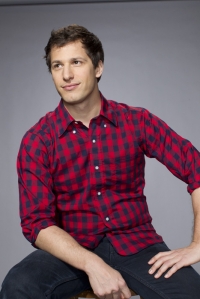 Ceremony to premiere on IFC, Saturday, February 23 at 10:00 pm ET/PT. Film Independent co-presidents Sean Mc Manus and Josh Welsh jointly announced that Andy Samberg will serve as host for the 2013 Film Independent Spirit Awards. The nonprofit, which also produces the Los Angeles Film Festival and Film Independent at LACMA film series, will hold the 28th annual awards ceremony as a daytime luncheon in a tent on the beach in Santa Monica on Saturday, February 23 with the premiere broadcast airing later that evening at 10:00 pm ET/PT on IFC. Additionally, longtime executive producer Diana Zahn-Storey is returning for her 18th Spirit Awards show.

"The moment I heard Andy's name, I knew we had our host for the 2013 Film
Independent Spirit Awards," said co-president Mc Manus. "He's one of the most funny young comedic actors working today and having him join us in celebrating this yearʼs exceptional films and talented filmmaking artists is a true honor."

"Andy Samberg is an amazing comedian, just as offbeat as IFC," commented IFC President & General Manager, Jennifer Caserta. "Weʼre thrilled that heʼs hosting this yearʼs Spirit Awards. This is a real treat for our viewers."

The 2013 Film Independent Spirit Awards signals Sambergʼs return to hosting duties since heading up the 2009 MTV Movie Awards, which was the highest rated Movie Awards since 2004.

"Andy is the complete package," said Zahn-Storey. "He's a great comedic actor, who sings, writes, and produces hilarious digital shorts. I look forward to working with him and taking full advantage of his many talents."

Emmy® award winning actor and writer Samberg is achieving as much success behind the scenes as he is on screen. Having just completed his 7th and final season as a cast member on Saturday Night Live, he most recently starred in the critically lauded and Spirit Award nominated film Celeste and Jesse Forever, written by and co-starring Rashida Jones, lent his vocal talents to the box office hit Hotel Transylvania alongside Adam Sandler, and starred on the hit BBC Three sitcom Cuckoo. Other film credits include: Sean Andersʼ Thatʼs My Boy opposite Adam Sandler; Will Gluck's Friends With Benefits opposite Justin Timberlake and Mila Kunis; John Hamberg's I Love You, Man opposite Paul Rudd and Jason Segel; Chris Miller's animated feature Cloudy with a Chance of Meatballs with Bill Hader, Anna Farris and James Caan; and Akiva Schaffer's Hot Rod, starring Jorma Taccone, Ian McShane, Sissy Spacek, Isla Fisher, and Bill Hader.

Additionally, Samberg is also Grammy nominated, along with his LONELY ISLAND partners Akiva Schaffer and Jorma Taccone. Their first comedy album Incredibad included the Emmy® winning sensation "D*** In A Box," featuring superstar Justin Timberlake and was the #1 selling comedy album in 2009 and 2010. Earlier this year they released their follow up, Turtleneck and Chain, which was nominated for a 2012 Grammy for "Best Comedy Album" and included such musical heavy hitters as Akon, Justin Timberlake, Nicki Minaj and Rihanna.

For more information on submission guidelines, voting, media and publicist credentials, and the history of the Spirit Awards, please visit SpiritAwards.com.

ABOUT THE FILM INDEPENDENT SPIRIT AWARDS
Now in its 28th year, the Film Independent Spirit Awards is an annual celebration honoring artist-driven films made with an economy of means by filmmakers who embody independence and originality. The Spirit Awards recognizes the achievements of American independent filmmakers and promotes the finest independent films of the year to a wider audience.

ABOUT FILM INDEPENDENT
Film Independent is a non-profit arts organization that champions independent film and supports a community of artists who embody diversity, innovation, and uniqueness of vision. Film Independent helps filmmakers make their movies, builds an audience for their projects, and works to diversify the film industry. Film Independentʼs Board of Directors, filmmakers, staff, and constituents, is comprised of an inclusive community of individuals across ability, age, ethnicity, gender, race, and sexual orientation. Anyone passionate about film can become a member, whether you are a filmmaker, industry professional, or a film lover.

For more information or to become a member, visit FilmIndependent.org.
####