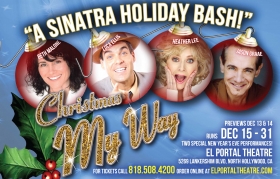 Our holiday show is perfect for company parties - we will even schedule special performances for single companies whereby they can have a reception before or after the show, and the ability to have an "awards ceremony" or gift presentation from the stage.

Conceived by David Grapes and Todd Olson with a book by Todd Olson and Original Musical and vocal arrangements by Vince di Mura, Christmas My Way, brings together Broadway performers and Los Angeles musical theatre favorites, Jason Graae, Heather Lee and Beth Malone along with crooner Luca Ellis, known for his Sinatra-like stylings, as they serve up cool versions of Sinatra mainstays. Joined by a swingin' live band, they make a little hey-hey with groovy versions of such Sinatra Christmas hits like "I'll Be Home for Christmas," "Silver Bells," and "Winter Wonderland."