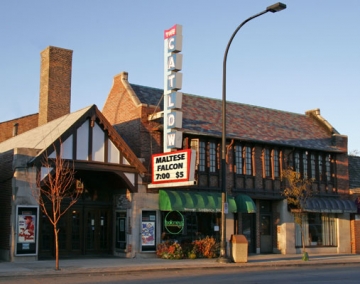 The historic Catlow Theater in Barringon, Illinois is threatened with "going digital or going dark." Owners Tim O'Connor and Roberta Rapata put out an SOS on July 26th, 2012 reporting that, without $100,000 to upgrade their projection equipment, they would be out of business. To date, 1,142 backers have come to the rescue. Barrington small business, Corporation for International Business (CIB), is one of those backers and is a Platinum Reel sponsor of the "Rescue the Catlow Historic Theatre from Extinction" fund raising project.

CIB got involved in the rescue effort when Andres Salaverria, Senior Vice President of IT for CIB, brought the issue to the attention of CIB's owners, Leslie August and Moira Wilson. They immediately realized the importance to Barrington residents and businesses of saving the Catlow. CIB reached into its community support fund and made a donation.

Not only does CIB have many film industry clients but they have a personal, as well as professional, connection to the local theater. Barrington residents, Curt Wilson, President and Bruce Wilson, Chairman, appreciate the historic Catlow and don't want the community to lose such an important piece of its past, and present. Not only does the theater enhance the Barrington community where CIB is located but becoming a sponsor of the rescue effort is a way to say thank you to O'Connor and Rapata. They maintain the historic theater and make attending movies economically accessible to area families. The Catlow charges $5.00 per ticket and keeps its concession prices affordable as well.

CIB also has a strong connection with the film industry. CIB clients include independent production companies, production studios and filmmakers who use an international customs document, the ATA Carnet. CIB issues the ATA Carnet for filming overseas. The document allows filmmakers to take their cameras and production equipment on location in foreign countries without paying import duty and tax on them. Corporation for International Business is an appointed carnet service provider to the US Council for International Business and has been located in Barrington for 25 years.