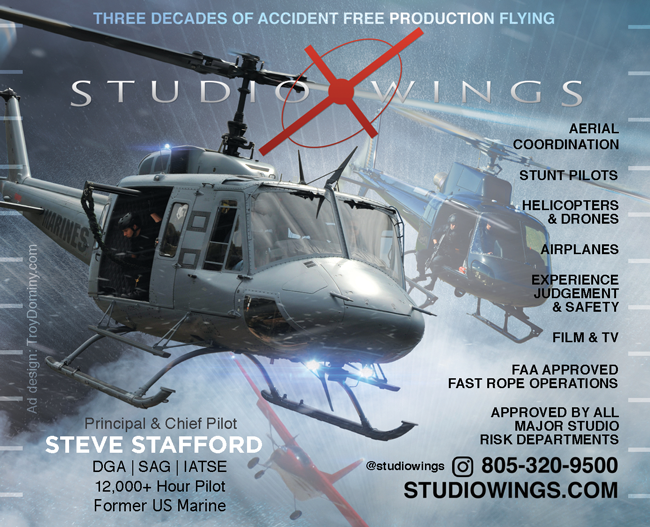 Steve Stafford is the President of Studio Wings. He was born in Connecticut and raised on a cattle ranch in Montana. Before beginning a career in the film industry, he served with distinction in the United States Marine Corps, receiving two meritorious citations. His Godfather, famed director and retired Navy Admiral, John Ford, attended his graduation and promotion ceremony at M.C.R.D., San Diego, CA. After leaving the Marines he studied acting, landing a three-year contract at Universal Studios. He was fascinated by what went on behind the camera, eventually gained entrance to the IATSE and worked as key camera assistant and then A-camera operator under Academy Award winning cinematographers, Haskell Wexler and Conrad Hall.

In less than five years he became a DP, shooting and directing action second units for both feature films and television. His work led to a contract with DDB Needham Worldwide in Chicago, directing national commercial campaigns. Concurrently, he produced and directed The Color of Evening, starring Martin Landau and Ellen Burstyn. The AFI award winning independent film caught the eye of then CBS president, Jeff Sagansky. As a result, Steve directed a number of long form movies (MOW's) for the network, as well as numerous one hour television episodes.

In the late nineties his friend, Harrison Ford, asked him to direct and choreograph the flying and crash sequences for Disney / Touchstone's Six Days/Seven Nights. After the widely acclaimed success of his work on that film, Steve made the decision to become a full time motion picture pilot and aerial coordinator, realizing a long-standing desire to combine his film production knowledge with his love of aviation and extensive flight experience. He has logged over 10,000 hours of pilot in command time in both turbine helicopters and long range, turbo jet aircraft.

Steve's credits his time as a Marine for his success in life and love of Country. He is passionate about giving back by mentoring and supporting Veterans who seek a career in the entertainment industry. He networks aspiring actors, writers and directors with creative producers and studio production heads. Studio Wings always gives first consideration to Veterans when hiring pilots, ground crew and fast ropers. His current team consists of former Navy, Marine and Army special operators, all with multiple Middle East deployments.

Studio Wings is a proud supporter of the Gary Sinise Foundation. Please support Gary's selfless work for our freedom fighters and first responders at GarySiniseFoundation.Org