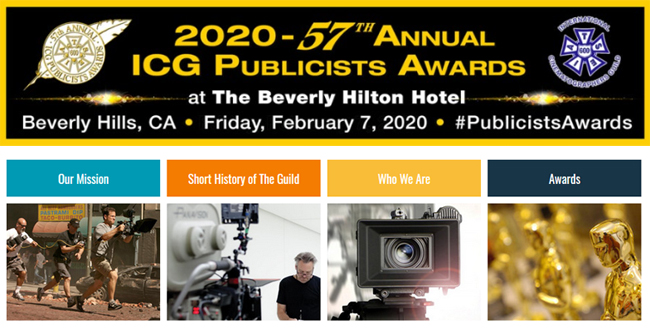 Ceremony to Take Place February 7, 2020 at The Beverly Hilton

The International Cinematographers Guild (ICG, IATSE Local 600) has announced its final list of nominations for the 57th Annual ICG Publicists Awards, honoring active members working on motion pictures and in television, whose achievements in publicity and promotion are deemed outstanding. Winners will be revealed at a ceremony Friday, February 7, 2020 at The Beverly Hilton Hotel. More than 800 industry leaders are expected to attend this year's luncheon, which traditionally occurs the week leading up to the Academy Awards. The announcement was made by Tim Menke, ICG Publicist Awards Chair.

In addition to unveiling the winners of the above categories, the ICG Publicists Awards will honor Anthony and Joe Russo, who helmed Marvel Studios' critically acclaimedAvengers: Endgame, with the Motion Picture Showman of the Year Award for their historic contributions to the art of cinema and television. Ava DuVernay, award-winning writer, director and producer, will be honored with the Television Showman of the Year Award for her visionary impact on television. Don Mischer, award-winning producer and director will be the recipient of the prestigious Lifetime Achievement Award honoring his prolific career as an internationally acclaimed producer and director of television and live events. The recipient of the Henri Bollinger Award for Special Merit will be announced in the near future, and the Bob Yeager Award for Community Service will be announced at the ceremony. Awards chair this year is Tim Menke with Sheryl Main serving as co-chair.

ABOUT THE ICG PUBLICISTS: Entertainment publicists first formed a union in 1937 as the Screen Publicists Guild, later becoming the Publicists Guild. In 2002, the Publicists Guild merged with the International Cinematographers Guild (IATSE Local 600). The first Publicists Awards Luncheon was held in 1964 and has since grown to an event attended annually by around 800 publicists, press, motion picture and television industry leaders, and other IATSE leaders. Motion Picture and Television Showmanship Awards and Lifetime Achievement Awards have been bestowed upon numerous esteemed actors, directors and executives. Additional awards include the Maxwell Weinberg Awards for a Television Publicity Campaign and for a Motion Picture Publicity Campaign, Les Mason Award for Career Achievement in Publicity, and the Bob Yeager Award for Community Service. The Guild also publishes the Annual ICG Publicists Directory. For more information about the ICG Publicists Awards, visit: www.icg600.com/ABOUT-US/Awards/Publicists-Awards #PublicistsAwards.

ABOUT THE INTERNATIONAL CINEMATOGRAPHERS GUILD (ICG) IATSE Local 600: The International Cinematographers Guild represents approximately 9,000 members who work in film, television and commercials as directors of photography, camera operators, digital imaging technicians, visual effects supervisors, still photographers, camera assistants, film loaders, all members of camera crews and publicists. The first cinematographers' union was established in New York in 1926, followed by unions in Los Angeles and Chicago, but it wasn't until 1996 that Local 600 was born as a national guild. ICG's ongoing activities include the Emerging Cinematographer Awards and the Publicists Awards Luncheon. The Guild also publishes the award-winningICG Magazine.