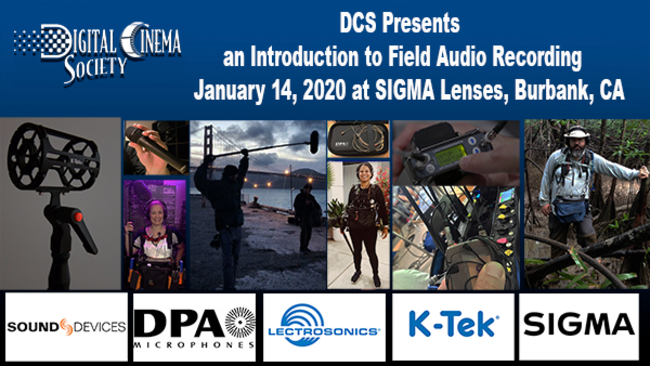 Join the Digital Cinema Society for an educational event covering the basics of motion picture location audio recording. The event will take place on the evening of January 14th at the west coast headquarters of Lens manufacturer SIGMA in Burbank, CA. Leading production and post sound professionals will share the tricks of their trade to help documentary filmmakers, cinematographers, and others who may not be audio pros, to successfully handle basic sound recording.

Topics Covered Include:
Audio Terminology, Technology and Concepts - Picking the right gear for the job - Microphone Types and their uses - Lavaliers, including Placement and Hiding - Boom Poles, Shock Mounts, and Cable - Mixers and Recorders - On-camera recording vs Double System - Maintaining Sync - On-set Best Practices - Wind Noise and How To Solve It - Wireless RF Issues and how to avoid them - Dealing with Noise On-Set - What is needed in Post and how to best deliver it - When to hire an Audio Pro

Instructors include:
Dan McCoy, CAS is an Emmy winning Supervising Production Sound Mixer with over 20 years experience recording cinema and documentary sound. He is a member of both the Cinema Audio Society and IATSE Local 695 and Owner of ToneMesa, Inc. a boutique L.A. audio production and post company.

Noah Mathers is a Founding Member of the Digital Cinema Society and a Local 695 Production Sound Mixer specializing in capturing great sound in challenging locations. Noah is a Veteran of the US Navy, with over 14 years experience in film and broadcast television, working for such clients as NBC, ABC, Discovery, History Channel, A&E, Spike, ESPN, and Syfy networks.

Woody Woodhall, CAS is President of Allied Post Audio in Santa Monica, CA. and is a supervising sound editor, sound-designer and re-recording mixer for independent feature films, documentaries, television programming, and multimedia. He is founder and moderator for the Los Angeles Post Production Group (LAPPG), a professional organization dedicated to expanding knowledge and expertise in the post finishing process and the author of the textbook Audio Production and Postproduction.

Prizes will be raffled and light refreshments will be served. The event is free and open to all, but confirmed RSVPs are mandatory.

To register, send an email with your contact details and "Field Audio" in the subject line to:
RSVPtoDCS @digitalcinemasociety.org
Note: If you want to bring a guest, DCS will need their name and email address in order to confirm the RSVP.