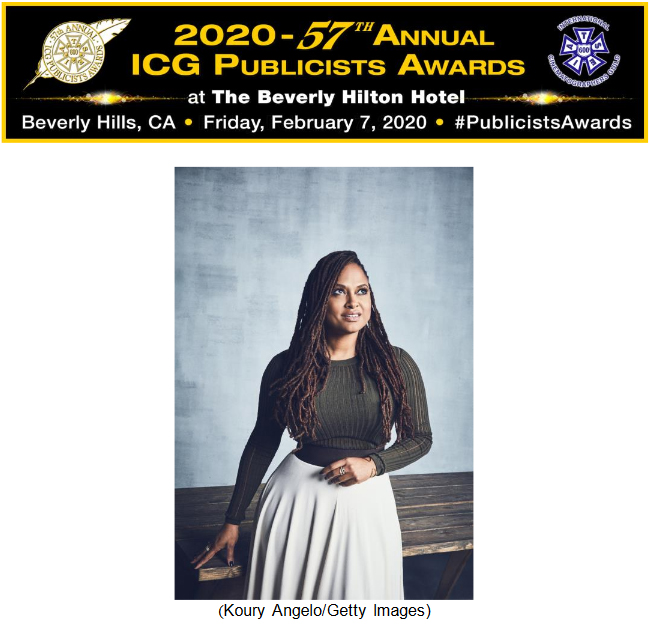 Award to be Presented at 57th Annual ICG Publicists Awards Luncheon on Feb 7
Ava DuVernay, award-winning writer, director and producer, is set to receive the prestigious Television Showman of the Year from the International Cinematographers Guild (ICG, IATSE Local 600) Publicists, honoring her prolific career as a visionary television producer. The 57th Annual ICG Publicists Awards ceremony, which traditionally occurs the week leading up to the Academy Awards®, will be held in the International Ballroom of The Beverly Hilton Hotel on Friday, February 7, 2020. More than 900 industry leaders are expected to attend this year's luncheon, celebrating excellence in publicity and promotion for motion pictures and television programs.

In making the announcement, Publicists Awards Co-chair Sheryl Main said, "Ava DuVernay is the talented force behind some of the most acclaimed works in televisionand film. Prior to becoming a filmmaker, Ava was an entertainment publicist for 12 years with her own firm. She appreciates the importance of creative strategic marketing campaigns and supports the roles of publicists in making a movie. We are proud to honor Ava, her expanding career and growing body of work."

Ava DuVernay said, "This honor means something very special to me. It comes from a tribe of professionals that I was proud to call myself a part of for over a decade. I'm more thrilled to be recognized by the publicist community than I can express."

Winner of Emmy, BAFTA and Peabody Awards, Academy Award nominee Ava DuVernay is a director, writer, producer and film distributor. Her directorial work includes the historical feature film SELMA, the criminal justice documentary 13TH, and Disney's A WRINKLE IN TIME which made her the highest grossing black woman director in American box office history. Based on the infamous case of The Central Park Five, WHEN THEY SEE US recently garnered 16 Primetime Emmy Award nominations, including Outstanding Limited Series and Outstanding Director and Writer for a Limited Series nominations for DuVernay. Currently, she oversees production on thefifth season of her critically-acclaimed TV series QUEEN SUGAR and her upcoming romance anthology CHERISH THE DAY. Winner of the 2012 Sundance Film Festival's Best Director Prize for her independent film MIDDLE OF NOWHERE, DuVernay continues to amplify the work of people of color and women of all kinds through her multi-platform media company and arts collective ARRAY, named one of Fast Company's "Most Innovative Companies." DuVernay sits on the advisory board of the Academy of Television Arts and Sciences and co-chairs the Prada Diversity Council. She is based in Los Angeles, California.

As previously announced, award-winning producer and director Don Mischer has been named the recipient of the prestigious Lifetime Achievement Award honoring his prolific career as an internationally acclaimed producer and director of television and live events. The ICG Publicists will also honor filmmakers Anthony and Joe Russo, whose critically acclaimed Avengers: Endgame is the highest grossing film of all-time, with the Motion Picture Showman of the Year Award.