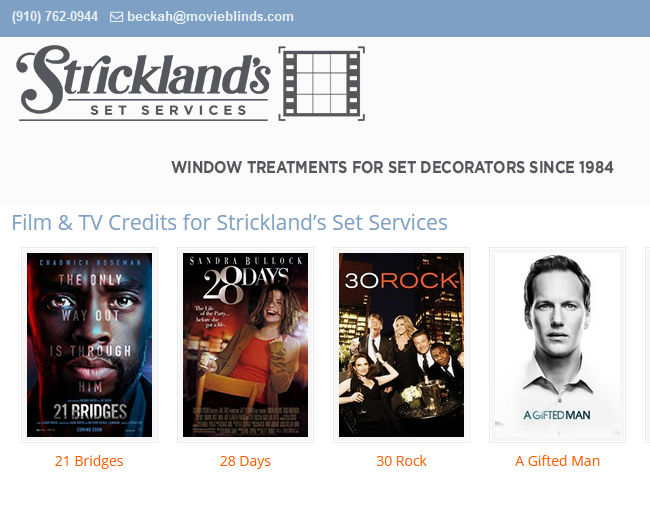 Locally owned and operated for more than 75 years, Strickland's is a premier provider of window treatments not only to the film and television industry, but to commercial businesses and residential homeowners.

Fred Kumpel, Owner: The 1984 film Firestarter introduced the world to Drew Barrymore; it was also one of the first films to introduce Fred and his team to the film industry. When film production crews discovered Wilmington, NC, they also discovered Strickland's - a family-owned window coverings business that stood just down the street from the eventual location of the EUE/Screen Gems studio lots. Fred Kumpel had been with the company since he was just 17. After working part-time for Strickland's through high school and college, he decided to put his Business Management degree to work in the business he already knew. Fred quickly assumed a leadership role, and by the time crews started rolling into town to film movies like Blue Velvet and Crimes of the Heart, Fred was innovating changes to keep the window coverings business current and meet the needs of fast-moving production teams who need everything "yesterday".

Fast forward three decades, and Fred now sits at the helm of Strickland's, having purchased the business from the Strickland family in 2008. Now its 75th year, Strickland's include a Set Services division as well as divisions for Blinds, Shades & Shutters; Closets & Home Organization; Custom Garages; and Draperies and Fabric Treatments. It's a thrill, he says, when he can lean over to his wife while watching a movie and say: "See that roller shade in the background? It came from Strickland's!"

Favorite snack: Popcorn - but with the butter layered throughout it, not just on top!

Laura Salo, Operations Manager: After working for Strickland's Set Services for 15 years, nothing ruffles Laura's feathers. She recalls one order where a set decorator called mid-morning needing boxes and boxes of vertical blinds shipped by 7pm that night. Undaunted, Laura rallied the troops, getting four employees (including Fred!) to make and box the blinds. When Laura arrived at FedEx with the last box, it was 7:02 pm. A FedEx employee who had talked to Laura earlier that evening unlocked the door, helping her ship the last box on time!

One of her most exciting moments on the job? Getting to install shades on the live set of Ironman while pyro technicians detonated explosives and cannons in the background.

At home, if she's in front of a screen, she's usually rooting for the Green Bay Packers. But, occasionally, she'll curl up on the couch for a movie with a bag of Hershey kisses, her teenage daughter, and her two dogs.

Beckah Daggett, Film Sales Rep: Born and raised in Wilmington, NC, Beckah grew up surfing the waters of Wrightsville Beach with her dad and her brothers. But when it comes to work, there's nothing laid back about her. When Beckah joined the team in early 2016, Fred and Laura knew right away that her attention to detail and gift for follow-through would make her an ideal support for Strickland's film and television production clients. After months of extensive training, Beckah was named Film Sales Rep. She now works hand-in-hand with set decorators and production teams as the primary contact for all orders placed through Strickland's Set Services.

After a busy day at the office, Beckah and her husband, a professional firefighter, like to Netflix and chill with their dog and rescue cats. Does she watch the shows she works on? Absolutely - Orange is the New Black and The Walking Dead are two current favorites.