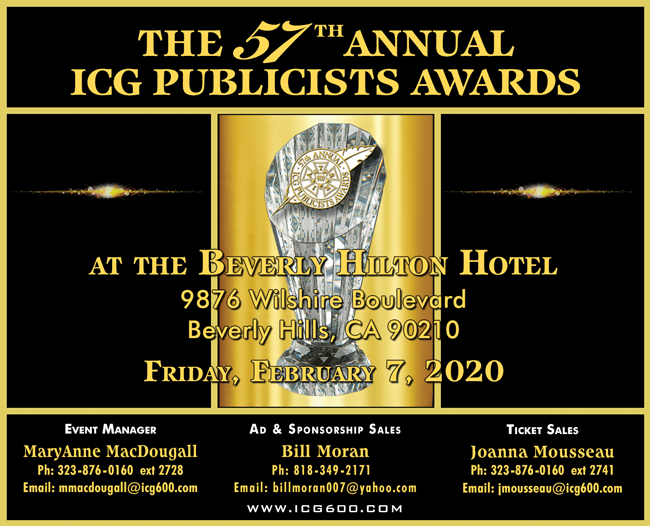 Award to be Presented at
International Cinematographers Guild's Publicists Awards
at The Beverly Hilton on February 7, 2020

The International Cinematographers Guild (ICG, IATSE Local 600) Publicists have announced the nominees for the Maxwell Weinberg Award for Television Publicity Campaign to be presented at the 57th Annual ICG Publicists Awards on Friday, February 7, 2020, at The Beverly Hilton Hotel. The award honors active members working in television whose achievements in publicity and promotion during the previous calendar year are deemed outstanding. More than 800 industry leaders are expected to attend this year's luncheon, which traditionally occurs the week leading up to the Academy Awards®. The announcement was made by Tim Menke, ICG Publicists Awards Chair.

"Today's television viewers have an embarrassment of riches when it comes to options of what to watch, but only so much time to consume all of what TV has to offer. A good, innovative, creative and strategic publicity campaign is essential in pairing programs with as large an audience as possible. These six inspiring campaigns are proof of such success," said Menke.

Awards chair this year is Tim Menke, with Sheryl Main serving as co-chair. Final online balloting will be held January 9-20, 2020 and winners will be announced at the ICG Publicists Awards Luncheon ceremony on Friday, February 7, 2020.

Further inquiries regarding the ICG Publicists Awards may be directed to MaryAnne MacDougall, ICG Events

ABOUT THE ICG PUBLICISTS

Entertainment publicists first formed a union in 1937 as the Screen Publicists Guild, later becoming the Publicists Guild. In 2002, the Publicists Guild merged with the International Cinematographers Guild (IATSE Local 600). The first Publicists Awards Luncheon was held in 1964 and has since grown to an event attended annually by around 800 publicists, press, motion picture and television industry leaders, and other IATSE leaders. Motion Picture and Television Showmanship Awards and Lifetime Achievement Awards have been bestowed upon numerous esteemed actors, directors and executives. Additional awards include the Maxwell Weinberg Publicist Award for a Television Campaign and for a Movie Campaign, Les Mason Award for Career Achievement in Publicity, and the Bob Yeager Award for Community Service. The Guild also publishes the Annual ICG Publicists Directory.

For more information about the ICG Publicists Awards, visit: www.icg600.com/ABOUT-US/Awards/PublicistsAwards

The International Cinematographers Guild represents approximately 9,000 members who work in film, television and commercials as directors of photography, camera operators, digital imaging technicians, visual effects supervisors, still photographers, camera assistants, film loaders, all members of camera crews and publicists. The first cinematographers' union was established in New York in 1926, followed by unions in Los Angeles and Chicago, but it wasn't until 1996 that Local 600 was born as a national guild. ICG's ongoing activities include the Emerging Cinematographer Awards and the Publicists Awards Luncheon. The Guild also publishes the award-winning ICG Magazine.

CONNECT WITH THE ICG