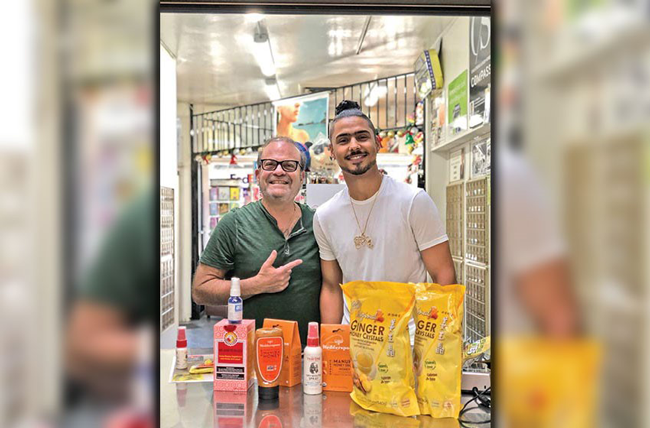 That's Mailbox Toluca Lake's Jonathan Kramer AKA Dr. Voice (left) with actor and singer Quincy Taylor Brown who performs under the mononym Quincy. He starred in the 2015 film "Brotherly Love" and released a music single "Friends First." Recently, he was a regular on the Fox TV musical drama "Star." Also known as Quincy Combs, he is the son of model/actress Kim Porter and Sean "Diddy" Combs. (Singer Al B. Sure! is his biological father.) Quincy was born in 1991 and named after his godfather, music legend Quincy Jones. Photo by Jonathan Kramer

Mailbox Toluca Lake seems like a typical post office box business with its exterior blending in with a row of other storefronts at 10153 1/2 Riverside Drive. But inside this shop it's a whole different story.For decades known as the unofficial "Town Hall for the Entertainment Industry," it's where ideas for movies and shows have been hatched and where there are about 1,000 mailboxes designated to mostly people in the industry. Of course FedEx, postal services and notary services are available.

Today the store is just as well known for the voice and throat remedies sold by owner Jonathan Kramer, informally known as "Doctor Voice to the Superstars." His products combat laryngitis, hoarseness and other ailments of singers as well as those doing voiceovers. "I've owned the store for 13 years," Kramer says. "I got into the voice business about seven years ago, and it's been extremely successful."

He recalled how his mother and sisters once had a chronic cough, and his cousin bought them a box of Grether's Pastilles, handmade throat lozenges from Switzerland. Kramer still sells them today, handing this writer a sample of Blackcurrent Grether's Pastilles "for throat and voice" from a bag of samples he says he is always handing out.

Kramer says several recording studios keep his merchandise in stock for their clientele. Voice coach Eric Vetro, who has trained stars such as Ariana Grande and Katy Perry, refers his clients to Kramer's store, while Burbank ear, nose and throat specialist Dr. Warren Line prescribes Kramer's products for his patients.