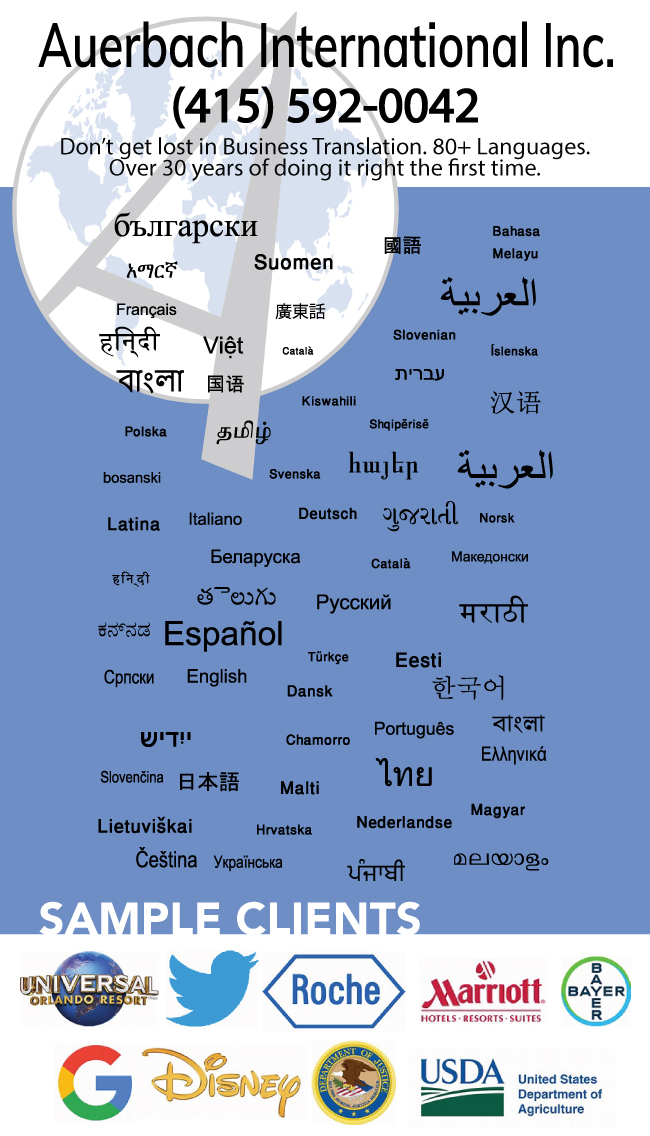 • A Swedish vacuum cleaner maker had sterling success advertising worldwide - including in the UK -- using its English slogan. But when their TV ad ran in US, "Nothing sucks like Electrolux" did not quite resonate in the same way with Americans.

• The phrase "No limits to your success" used by a multi-national computer firm could not be translated into German because in Germany it would sound arrogant and too exaggerated.

• A US interior design firm promoting its services in Dubai had a tagline, "Create your own destiny." Had the Arabic been translated literally, the marketing campaign would have blundered dramatically; among strict Muslims, only God - not people -- can create.

• Ford introduced the Pinto car into Brazil, unaware that "pinto" is slang there for "penis."

All of these examples illustrate why it is important to rely on trained, professional translators to properly convey your desired message.

Some companies think they can find translators on the internet. However, if you don't speak their language, how will you know whether a translation is accurate and the grammar correct?

For instance, an inexperienced linguist in China translated "silicon wafer" as "silicon biscuit" and a Chinese translator here rendered the real-estate term "sunken living room" as a "living room with no foundation."

The best way to preserve your reputation and to ensure accurate international communications is to rely on a professional language agency with many decades of experience. Most professional agencies hire linguists with four primary qualifications:

• Advanced (usually Master's level) degrees in linguistics or the art of translation;
• Translating only into their native language to ensure correct nuances and expressions;
• At least ten years' continual experience; and
• Specialization in the terminology of your field or industry.

A professional Language Service Provider (LSP) can translate anything in over 50 languages; provide multilingual desktop publishing in any format; localize websites, videos, software and other electronic files; and can often provide interpreting services by phone or in-person.

1. Initial draft Translation, which is normally 95% accurate;
2. Editing: a critical second-translator review to check for nuances, expressions, sentence structure and cultural correctness; and
3.Proofreading for spelling, punctuation and grammar.

Translations are then formatted to match the source files as closely as possible in each language, and then proofread again to ensure accuracy of the layout.

1. It maintains consistent vocabulary;
2. It ensures accuracy;
3. It allows a price reduction for repetitions; and
4. It shortens translation time.

Individual professional translators normally use TMs. However, most of them have neither Layout capabilities nor knowledge of how to re-create brochures, manuals, websites and any graphics into your target languages. That's an advantage that language agencies / LSPs have.

Can you rely on Translation Software?

When traveling and for simple phrases, a pocket translator is normally sufficient. Translation software is also good to get the gist of what some foreign document says in English. But machine translation (MT), as it is properly called, should NEVER be used to translate a company website or marketing promotions. Machine translation can make mistakes that may change the meaning comically or substantially.

For example, the technical automotive sentence, "The latest trucks come equipped with a gear-driven transmission and a 3-foot diameter heavy-duty wheel" was Google-translated into French. Its meaning in English was: "The last trucks are equipped with a gear transmission and a robust wheel 3 feet in diameter." Among other issues, note that "latest" in English means "most recent" and not "last," and that the differences in the two languages change important nuances.

While MT is constantly improving, you have one shot with new and potential customers. Do you want to risk your company's reputation for excellence with an MT promotion that demonstrates sloppiness and mistakes? If your firm cuts corners to save pennies using MT instead of presenting itself professionally and accurately, why should prospects trust that you will not cut corners on their projects with you?

Can you rely solely on overseas agents?

We once provided a technical translation about dentistry into German, and our client forwarded it to its overseas distributor for verification. The distributor reported that our translation was incorrect. When we asked to review his suggested changes, we discovered that the distributor spoke German, but a dialect from near the Swiss border.

Languages such as Vietnamese also have many variations according to the speaker's original village or region. And no local dialect should ever be used for standard business documents and websites.

If your company's overseas agents or in-house speakers do review an agency's translations, always return their edits to your professional agency to verify. While their edits may improve the flow or use in-house terminology, they may also be full of misspellings, wrong grammar and incorrect word usage - such as an English sign in a Romanian hotel lobby that warned, "The lift [elevator] is being fixed. During this time, you will be unbearable."

Also, be careful that overseas agents or distributors do not add or subtract translated sentences. They may insert claims for which you may be liable or remove contract clauses that they did not like. A translation should always be faithful to the original file; translators are not allowed to rewrite your prose or to impose their opinions.

An LSP presumes that you have done your research, presenting your contracts, manuals, videos and websites with the content that you want to present to the world. Overseas agents' concerns should be incorporated into the final English sent to your language agency for translation.

As another example, a Portuguese marketing agent returned a translation to his company with many words rewritten. Unlike English which is governed by common usage, languages such as Portuguese, Spanish, French and German have rules derived from government Language Academies in each country. Those official bodies determine how words are to be spelled, and which words are to be used or eliminated in textbooks, television, newspapers and other media. In instance above, the LSP incorporated the recently revised and official Portuguese spelling which the overseas agent was totally unaware of.

For all of these and other kinds of reasons, best practices dictate that the client return in-house or overseas reviewers' edits to the language agency for verification. While many edits may simply be alternative ways of saying the same concept ("My favorite season is fall" vs. "I like autumn the best"), some edits may present incorrect word usage, wrong grammar or misspellings - or add or subtract sentences not in the original. Your language agency will quickly evaluate each suggested change so that you, the client, can decide whether to accept or reject it.

One of the biggest mistakes that companies make is to assume their company name, desired product names or slogans and taglines will easily translate into other languages. These same firms spend hundreds of thousands or millions of dollars in marketing campaigns to launch a new product, blissfully forgetting to invoke incredibly cheap insurance. And that insurance is the very minor expense of hiring your LSP to check your desired names, taglines or slogans in the top (ten) languages of your overseas markets.

Astonishingly, these branding blunders are often committed by huge multinational firms which can easily afford the minor price of pre-marketing evaluations. Whether by arrogance ("We have years of experience knowing how to market abroad") or oversight, some choice blunders are:

• Proctor & Gamble used the US baby-carrying stork image to introduce Pampers diapers in Japan. Its marketing effort failed because in Japan, babies are not delivered by storks but on giant floating peaches.

• The movie "Like Water for Chocolate" translated its title directly from Spanish into English. But the English had zero connotation of the Mexican implication of boiling to a state of sexual arousal or passion.

• When Schweppes translated its "tonic water" into Italian, the label became the less appetizing "toilet water."

• Puffs nose tissues used its corporate name to enter Europe where its sales did not do very well. Why? "Puff" in German means a brothel and in the UK, calling someone a "Puff" is like calling him a "fag" in the US. And if some Brit asks you for a "fag," the person is requesting a cigarette, not a romp in the sheets.

• The former US airline Braniff used the slogan for its upholstered seats "Fly in Leather" to entice first-class passengers to Mexico. Unfortunately, the Spanish translation connoted, " Let's fly naked together and see what happens."

Translation is more than words. A reputable LSP also has international marketing experience to know what colors, images and subtleties communicate effectively - or don't.

All languages have nuances, expressions and cultural references that simply don't exist in other languages. LSPs with years of expertise know how to handle these situations, and how to use appropriate technology to facilitate the translation process.

Your international business success may depend on whether you use amateurs -- or language professionals who understand cultural nuances and correct usage and who, unlike software, translate concepts, not just words.

Long-established LSPs should also have expertise with cultural nuances, images and sales strategies which are critical in your global marketing.

How you choose to navigate business translations is up to you.