Meet the gutsy snake wrangler behind 'Them That Follow'

Meet the gutsy snake wrangler behind 'Them That Follow' 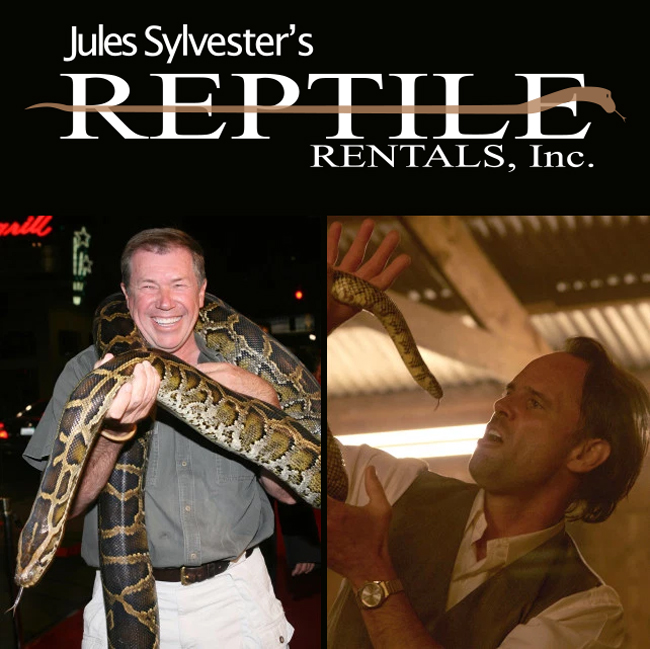 If you're looking for a rattlesnake to star in your movie, "Western diamondbacks have an attitude that just won't quit!" says British snake wrangler Jules Sylvester. He's been working with venomous serpents for 50 years, and brought several of his prize rattlers to the set of "Them That Follow," a new drama out Friday about a rural Pentecostal church that employs the old-time practice of snake handling.

Although Sylvester's never been bitten - and that's after handling over 10,000 venomous snakes throughout his career, he estimates - he can't believe churchgoers who wave rattlesnakes in the air manage to (usually) escape with their lives. "How they don't get bitten is beyond me," says the 68-year-old Sylvester. "It's bizarre. I don't know why they're not all dead, but they're not."

In "Them That Follow," the daughter (Alice Englert) of a Pentecostal pastor (Walton Goggins) finds herself questioning her faith in the wake of an illicit relationship with a young man (Thomas Mann) who's not the fellow parishioner she's supposed to marry. There are several highly tense scenes that involve snakes, including rattlesnakes being brandished during frenzied worshiping.

Co-director and co-writer Britt Poulton was prepared to shoot with snakes ... but then Sylvester and his clients showed up. "I grew up in an area where the Western diamondback was an unwelcome but common occurrence," says Poulton, an Idaho native, "but never in my life had I been so close as I was on set. Even though there was indestructible glass between us and the snakes, when they rattle, it sends shivers up your spine, and you have this chemical fight-or-flight reaction. There was more than one time we had to call 'cut' because we were trembling." 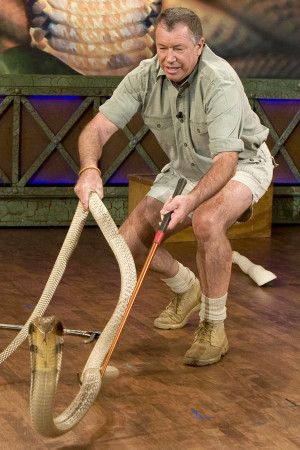 Jules Sylvester handles a king cobra during a
2008 episode of "The Tonight Show with Jay Leno."
NBC via Getty Images
Sylvester says this type of rattler is the go-to for chilling footage, because "they're large and very aggressive, and nothing's worse [for a film] than having a rattlesnake that just sits there. With these guys you know exactly what you're going to get."

Happily for the actors who actually had to make contact with the animals, Sylvester used snakes which resemble poisonous brethren but are harmless, such as the rat snake. "I gave Walton Goggins a big, fat, yellow and black Florida kingsnake," he says. "They're very gentle, and you can hold them up, put them around your neck."

Sylvester is comfortable with all manner of snakes, not to mention the variety of other reptiles he keeps in his enclosure in Ventura County, Calif. Born in England and raised in Kenya, he started his training in snake-catching while working at Nairobi's Snake Park as a teenager. Over his career he's had some celebrated gigs - he was the wrangler on "Snakes on a Plane" - and says he's done at least five movies or TV shows about religious snake handling, including one episode of "The X-Files."

"I've got these beautiful albino pythons - one's called Banana and the other's Steve. They're seven or eight feet long - I call them the Britney Spears Special. I put them on people one at a time until I can feel them getting a bit bored." His snake-whisperer skills tell him very clearly when it's time to wrap it up: "I can feel it all through them: 'Ah, OK. We're done here.'"


Jules Sylvester's Reptile Rentals Inc., highly regarded by the American Humane Association has become a "go to" company for snakes, alligators, lizards, spiders, scorpions, frogs, insects, rodents, tortoises, and many other animals. Reptile Rentals has an unrivaled safety record for the cast and crew as well as it's highly trained and experienced handlers - no bites, accidents or problems for over 32 years!