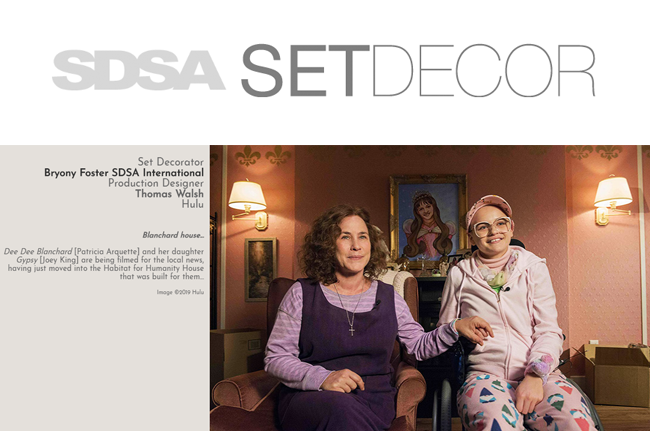 
Season One follows Gypsy Blanchard [Joey King], a girl trying to escape the toxic relationship she has with her overprotective, controlling mother, Dee Dee [Patricia Arquette], who was accused of abusing her daughter by fabricating illness and disabilities as a direct consequence of Munchausen syndrome by proxy. Gypsy's eventual quest for independence opens a Pandora's box of secrets, one that ultimately leads to murder. --Hulu

Production Designer Thomas Walsh and Set Decorator Bryony Foster SDSA International were brought to Savannah, Georgia to re-create this real-life scenario that took place in Springfield, Missouri. Thomas designed and built a cul-de-sac of 14 houses to give full opportunity for the production to accurately represent the true story.

In 2008, after their home had been destroyed in Hurricane Katrina, Habitat for Humanity had built and presented a house to Dee Dee and Gypsy Blanchard. Thus, the newly constructed houses [sets] are a definitive part of the storyline and are shown both in their state of newness and with a bit of wear as the story leaps forward 7 years to 2015, and intercuts back.

The two key houses, a bright pink one given to the Blanchards and a blue one belonging to another single mother and daughter, were "practicals"-completely dressed, the interiors fully developed by Bryony and her team, with the dressing evolving with the storyline. The other houses were shells, with exteriors and windows and doorways dressed. Bryony utilizes backstory to help her crew envision and bring about the personalities of each set. They "named" the houses for dressing reference, Bryony smiles, "The orange house with toys in the yard and a brightly colored picnic table became The Yuppie House, the gray/green tidy one was The Retired Couple,etc."
[See photo gallery above.]

The two signature houses were as opposite as their places on the color wheel, one a candy box fantasy, the other a simple, natural look, each reflecting their owners. While maintaining the façade of the exterior, Dee Dee's penchant for pretense and lies explodes out of control into a hoarder's nest within. Bryony and team give the actors visual verisimilitude of the disintegration of the mother and her control over her daughter and their lives. [The full interior of this set was simultaneously built and completely dressed on stage at Film Factory, Savannah.]

There are several other key sets that put the story in context, including an impactful rendering of a cosplay/costume version of a Southern ComiCon(!) Bryony gives kudos to the production's Costume team. [See photos above.]

Among her favorite elements for this set are the enormous dragon sculptures that she found in Savannah and used as guardians of an exhibition space. [See photos above!!]

Another significant set was Dee Dee's childhood home, likely where the seeds of her syndrome were planted. Bryony based the backstory on a bird motif, which was such a timely fit for this for this period set. The furniture discoveries are brilliant as well!

Thomas and Bryony blended accuracy and an artful eye, collaborating even before they arrived in Savannah. "I love working with Thomas," says Bryony. "He always has tons of reference by the time I start, and he shares it with everyone. This makes it easy to communicate and discuss which direction we are going to take, and then, off I go! He is always accessible and open to suggestions, so it's a creative joy to work with him. We both love the challenges and the exploration."

"Early on, before I got to Savannah, I read the original BuzzFeed article written by Producer/ Writer Michelle Dean. I also watched the HBO documentary and anything I could from YouTube-all rather disturbing! This is where I trusted Thomas to make it visually interesting!"

Having worked on projects all over the world, the transplanted Brit/now American citizen knows how to approach a new location and assess how much she would be able to mine local resources and what specifics she would need to provide through her long-standing vast list of sources, including SDSA International Business members, on which she often relies.

"I flew to Atlanta and had a look round CAPS and Alpha Medical Resources prop houses, and took some reference photos to remind me what was available there once we were situated in Savannah...thanks go to them for the rental of the jail and medical dressing. I had American Screen & Window Covering do all of the blinds, and per usual, they were wonderful about getting everything needed where and when we needed it! Otherwise, most of our shopping was at Savannah thrift stores, yard sales and estate sales. One does as much research as you can on the subject, and then I just let it go and follow my instincts. I do love finding that special piece that I've never seen before!

However, it really is a collaboration...Designers, Directors, Producers and Actors and crew have ideas...so, we digest and distill, search and discover, then put the puzzle pieces in place."

"And, my crew was fantastic and tireless! Their attention to detail in all the dress and redressing was total...especially difficult because we did not shoot chronologically, much wrap and hold and then redress. I could not have asked for harder-working, more creative Set Dressers than the amazing crew I had from the East Coast, gathered by my fabulous leadman Jungle Shaughnessy. I loved them one and all, and of course my wonderful Buyer, Rachel Wilkin and my solid Onset Dresser Bob Smith."

"At the end of the shoot, we shipped three 53ft containers up to Universal Assets in NY, and donated to all the linens, beds and toiletries, etc. that were not considered assets."

"The Producers were very much supportive in the aspect of Giving Back to the community, and I'm a great believer in donating directly to the people who need it. In Savannah, we found a wonderful organization called Safe Shelter, which helps Victims of Domestic Violence...men, women and children who literally are starting again with nothing. We also donated items to Habitat for Humanity, the local mission and Goodwill...literally Giving Back!