Despite the early Spring chill - monsters, special effects, and superheroes are burning it up just outside Toronto. There, in Etobicoke - at the newest MastersFX Studio - the company's award winning character FX team is celebrating its third anniversary, and the crew's work creating fantastic new creatures for hit TV shows and popular movies is hotter than ever.

New projects from the MastersFX/Toronto team include their work on The Handmaid's Tale - with season three of that acclaimed Hulu series set to premiere in June. MastersFX has been supplying the grisly makeup effects for the award-winning series since its debut. With The Handmaid's Tale currently filming its third season, the MFX studio helps bring the series' alarming world of "Gilead" to life; its work ranging from artificial babies and bodies, to pregnancies and surgical procedures. In addition to the on-set applications of these FX, Lead Makeup Effects Artist Zane Knisley has been spearheading the prosthetics design for each episode, meticulously working to have the effects look as true to real life as possible. 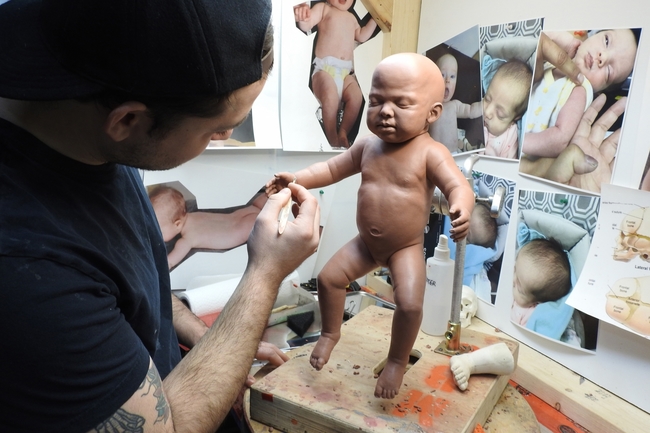 FROM HANDMAIDS TALE Artist Josh Raymond working on one of the many prosthetic babies MastersFX created for the series The Handmaids Tale
For four seasons of the acclaimed science fiction series The Expanse - which will soon premiere at its new streaming home on Amazon - MastersFX/Toronto has created many of the memorable prosthetics effects, and tattoo designs for the "Belters," and the "Extreme Belters," along with tattoos for the main cast of the show. A customized burn design was also created for the character of "Commander Klaes Ashford," played by David Strathairn, and was applied by MFX Effects Artists Kyle Glencross and Supervisor Zane Knisely. The Toronto team helped to bring some of the grisly battle scenes to life by fabricating wounds of various healing stages, scars, and mutilations.

Additionally, MastersFX/Toronto (MFX/TO) has recently completed the make-up FX and character masks for the fresh new Netflix series The Umbrella Academy. Team member and veteran makeup effects artist Kyle Glencross sculpted and painted the "Hazel" and "Cha Cha" masks worn by Mary J. Blige and Cameron Britton for that new show. Glencross added his unique style to create these revered character masks. The MastersFX (MFX) team also produced the "Domino" masks worn by the series' young cast of superheroes. Various character scars, wounds, and grisly prosthetics were designed for the show, all of which appealed to its creator Steve Blackman's love of gore and practical effects. 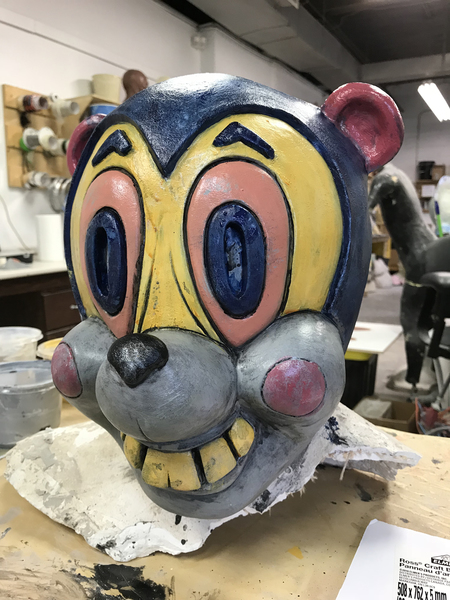 FROM UMBRELLA ACADEMY This Hazel character mask was sculpted and painted for The Umbrella Academy by veteran makeup effects artist Kyle Glencross
MFX/TO Supervisor Zane Knisely - who has been creating innovative makeup effects for the entertainment industry for over 20 years - leads the artists at the MastersFX Toronto Studio. "Ever since we opened three years ago, it seems like we've consistently been on a growth spurt. We had to move into a new, larger space last year, in fact. Our new space is bustling, and bursting at the seams, with incredible new monsters and fake body parts," he says.

"Zane is an amazing artist -- we've been working together even before creating the Toronto Studio," adds MastersFX President and Founder Todd Masters. "Zane mentioned to me a few years ago that we need to build a space in Toronto, so we started talking and costing out the idea. Then, nearly at the same time, a producer on a series we were developing also told us we NEEDED to set up a shop there. Zane was exactly right!"

Masters explains that after originally locating what they thought would be enough space back in 2016, he and Knisely launched the Toronto Studio on April Fools day of that year, appropriately enough. "We started with something small, just to secure our presence in that amazing city," Masters said, "And we've just kept growing. We've never looked back." 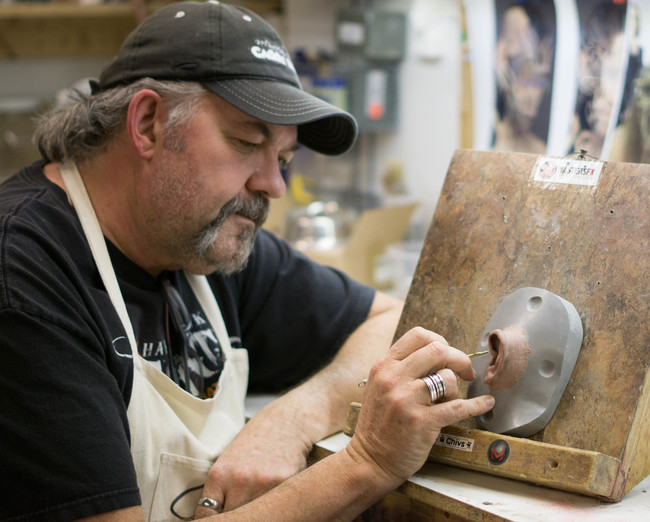 FROM HANDMAIDS MastersFX created a silicone ear appliance for Season 2 of The Handmaids Tale Veteran makeup effects artist Graham Chivers sculpted the ear This ear was then rigged with a blood tube and could be cut on camera
Other recent projects enjoying the remarkable FX contributions of the MastersFX/Toronto Studio include the reboot of David Cronenberg's horror classic Rabid, from the Soska sisters. Regarding the unpredictable indie film, set for a late 2019 release, Knisely said, "Todd and his Vancouver team typically work on the Soskas' film projects, so when he called me and told me that we'd be involved with Rabid from Toronto, I thought he was kidding. He wasn't kidding."

"It was wonderful to reunite with Todd and MastersFX on our remake of Rabid, given it was our return to body horror," the film's Writers and Directors Jen & Sylvia Soska said. "This was our first time working with Todd's Toronto Studio, and Zane and the other artists based there simply blew us away with their original, innovative, and totally unforgettable effects. We simply cannot wait to unleash Rabid later this year!"

Additional new projects for the busy MFX/TO Studio include the upcoming Netflix feature film In the Shadow of the Moon, and CBC's The Coroner.

Another project which makes the MFX/TO team especially proud was their work on the horror film The Dark, which has just been nominated for a Fangoria "Chainsaw Award for Best Makeup." Regarding the honor from that highly influential genre magazine, Knisely said, "The Fangoria Award Nomination was an awesome surprise! The Dark was one of our early projects here. Our team really went the extra mile for that film, in support of a great script we all really liked. We are thrilled that Fangoria fans appreciated it too - it's a tremendous honor." 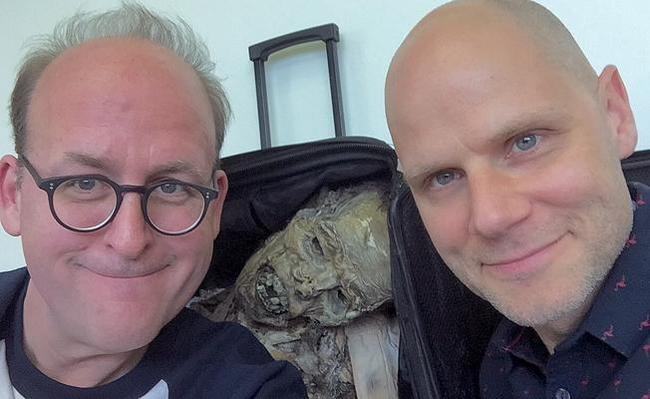 Founded in 1987 by two-time Emmy Award winner Todd Masters, MASTERSFX is a multi-award winning character and special FX house with studios in Vancouver, British Columbia, and Toronto, Ontario.
MASTERSFX's creative teams produce a unique blend of practical and digital makeup and special FX, prosthetics and animatronics, through a process called "dMFX," for hundreds of hit feature films, TV shows, and commercials. Creators of the cadavers for "Six Feet Under," vampires from "True Blood," Borg FX for "Star Trek," and the baby makers from "Look Who's Talking," MASTERSFX has been contributing its blend of custom practical and digital FX to a wide range of TV and feature film projects for more than 30 years.

The company also supplies dummies and detailed FX props for studios to rent, and custom and stock temporary tattoos, as well as their unique, fast-apply prosthetic system, ProGASH.

Included among the recent TV projects to which MASTERSFX has contributed its work are "Handmaid's Tale," "The Magicians," Netflix's "The Order," "The Good Doctor," "The Umbrella Academy," "The Flash," "This is Us," and "What We Do in the Shadows," and historically, "True Blood," "Six Feet Under," "Tales from the Crypt," "Fringe," and many others. Among the company's upcoming film credits are "Child's Play," "Sonic the Hedgehog," "The Perfection," Disney's "Timmy Failure," the 2019 version of "Rabid," and historically, "RoboCop," "The Day the Earth Stood Still," "The Haunting in Connecticut," "Star Trek: First Contact," "The Horse Whisperer," "Slither," "Snakes on a Plane," "Buffy the Vampire Slayer," "Look Who's Talking," and dozens more.

A multi-award winning FX artist, Masters is the winner of 2016 Leo and Daytime Emmy Awards for "Outstanding Makeup" for the Netflix series, "Monsterville." He is also the winner of an Emmy Award in 2003 for the 2001/2002 Season of "Six Feet Under" in the category "Best Special Effects Makeup." In 2006, MASTERSFX won a "Saturn Award" for "Best Make-Up FX" for its work on the film "Slither." See more at: www.mastersfx.com