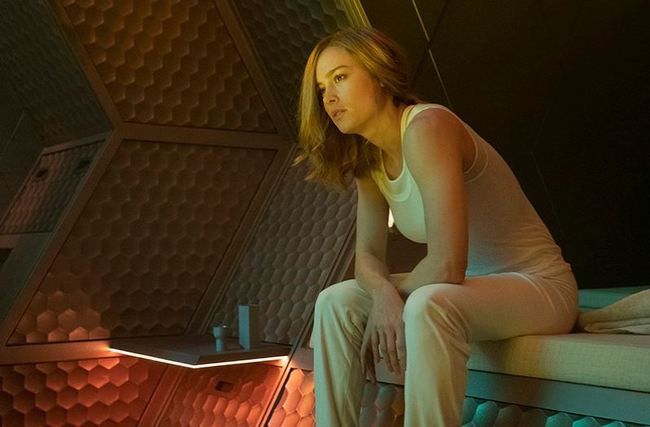 A former officer and Air Force test pilot, Carol Danvers a.k.a Vers [Brie Larson] becomes the universe's most powerful hero when Earth is caught in the middle of a galactic war between two alien races, the Kree and the Skrulls. Danvers is a maverick and not easily controlled, but through her journey she finds her true self and the path to harness her incredible powers.
- Marvel Studios


The CAPTAIN MARVEL film is set in the 1990s...a first for the MCU.
In this pre-Avengers time period, cell phones were just phones, pagers were in, Internet cafes were the rage and video rental stores dotted the landscape on Earth, while superior technology reigned on other worlds.

1990s...Here and There...
With the story set in the mid-1990s, the filmmakers decided to base the production in and around Los Angeles for its 75-day shooting schedule, including shooting Los Angeles for Los Angeles, using local stages and locations for the alien environments, plus a stint in the outskirts of Baton Rouge for the dreamy, beautiful atmosphere of the bayou country.

Iconic '90s...
As part of a galactic Spaceforce from the Kree homeland planet, Danvers, known as Vers at the time, literally crashes into the 1990s, through the roof of a Los Angeles Blockbuster Video store. Nicholson, Gaffin and their teams transformed a derelict strip mall into an instantly recognizable slice of the '90s with the iconic video store, a Radio Shack, a dry cleaners and even the corner phone booth!

Gaffin reveals, "My crew laughed at me when I told them we would need 5000 video tapes for the Blockbuster store! Then they enthusiastically jumped in, searching through thrift stores and eBay, buying large lots of VHS tapes and compiling a huge stash. We basically sifted through about 7000, looking for the right size specific to Blockbuster, and ended up with about 4000 good ones. We then made Blockbuster labels and covered the cassettes with the appropriate real movie titles from the '80s."

They also re-created vintage candy boxes and bags-racks and racks worth-and the now also iconic Rock the Vote posters along with band and movie posters, which required myriad specific clearances. [See photos above]

At one point, Vers/Danvers ends up at a cyber-café, dealing with dial-up internet! The period computers and café elements were spot on...
Welcome to the '90s!

Locations...
Other notable location work included an atmospheric older crash site semi-buried at a mountain lake. The scattered plane parts included a 30-ft cockpit and wing tips...and the destroyed master component of a new energy...all "buried" in the shifting sands by Gaffin's crew at the majestic Shaver Lake, CA.
[See photos above for more details.]

The screenplay origins for the "lost" plane were filmed at Edwards Air Force Base. Gaffin says, "The personnel at the base couldn't be more helpful. I had a great relationship with them during the IRONMAN shoots, and they understood the importance of authenticity of the sets. This time it was re-creating a hanger scene from that era, with the appropriate planes in the background as well as in key positions.

S.H.I.E.L.D. underground facility...
MCU fans, in particular, will appreciate the pre-Avengers emergence of Nick Fury. The former Army Colonel & CIA Cold War operative, has joined S.H.I.E.L.D., a covert international peacekeeping organization that operates as humanity's first line of defense against Earth's most dangerous enemies...and eventually will become its Director. However, at this point in the 1990s, he doesn't believe that aliens exist...until he meets Vers/Danvers and some shape-shifting Skrulls in a Los Angeles strip mall!

Fury joins Vers/Danvers in her quest, taking her to a secret S.H.I.E.L.D. underground facility containing miles of vaults of stored information. To create a realistic impression and provide background for some major fight scenes, Gaffin says, "Over 5000 boxes were assembled in alphabetical order, labeled extensively, then archived at the UCLA Library basement. Buyer Sara Gardiner-Gail had a detailed layout and assignment of every box to be assembled and its placement, and our crew's diligence and perfectionism creating these archives was an outstanding effort by everyone!" [See photos above.]

Editor's note: After the shoot, Gaffin was pleased to be able to donate the archival quality boxes to the library. As most set decorators feel, "I hate waste and love to recycle/reuse whenever appropriate and possible."

Stage-builds/other worlds...
While there were many practical locations, there was also a fair share of stage work where Nicholson, Gaffin and their teams [many hands and minds!] created the intergalactic worlds of the Kree and Skrulls.

Crucial that the two civilizations differ from each other in order for the audience to tell them apart, the Kree world is angular and symmetrical, with heavy use of metals, the Skrull world is curved and asymmetrical, with the use of ceramics and other organic materials. This basic broad-stroke design aspect applied to all elements of the two worlds, including buildings, spaceships, interiors and clothing.

Nicholson says, "The overall curved design for the Skrulls extended into the interiors of their ships as well. When you see the interior of the main battleship, it's all about organic lines and curves. A lot of it was made out of ceramic with a skeleton behind it. We did an architectural language that was about plates and skeletons and the skeletal structure behind that. So, there are layers and layers...all woven organic materials. That contrasts with the Kree world, where we went for a much more linear, straight-line and angular look."

The geometric, controlled look of the Kree world is depicted in Vers's quarters, which gives audiences a glimpse of Kree life, as well as another perspective of the beautiful futuristic city below.

Down home...
In deliberate contrast, we see the simple Earth-life Kodachrome-esque flashbacks Vers/Danvers experiences of her childhood...momentary glimpses include a carnival at a raceway where Gaffin's team dealt not only with circus tents and rides, including a Ferris wheel, but also 2000 hay bales to line the perimeter!

Pancho's bar...
Along the journey of discovery, Vers and Fury visit a version of the Pancho Barnes test-pilot hangout bar made famous in the film and book THE RIGHT STUFF, which happens to be the VHS film cassette Vers pulls from the shelf when she crashes through the video store roof. She senses a connection...

Along with aeronautical ephemera, Gaffin brought in a vintage jukebox with appropriate vintage CD's, and framed photographs selected from the archives at Edwards Air Force Base, plus photos created to fit with those, which show hints of Vers/Danvers's history...

Maria Rambeau's world...
A former test fighter pilot and Carol Danvers's best friend, Maria Rambeau has a passion for what she does, is strong-minded and centered, and was a loyal confidante in Carol's life. It seems a natural progression to find her and reconnect, which happens on the other side of the country in the bayous of Louisiana. Creating Maria's warm, unpretentious (but full of symbolism) home and hanger/workshop was a delightful project that Gaffin embraced. Here we find the family layers of living...it was Rambeau's parent's home and now where she raises her daughter...and simplicity in a beautiful natural setting. Here, Carol finds the emotional connection she was missing.
Such a contrast to the Skrull and Kree worlds, and yet...oops, no spoilers!
We'll let you discover for yourself!

Collaboration...
Gaffin notes the depth of collaboration and commitment throughout the film. With her background in photography, she has an enhanced awareness of the importance of the lighting and framing of a shot, and has worked closely with top cinematographers around the world. Whether re-created time-periods or leaps into other worlds, Gaffin brings an artful aspect to the film, "I look at it as I would a photo, how to bring a deeper resonance into the frame." She appreciated Davis's process, vision and openness. "It was a privilege to work with someone of his caliber and kindness."

For the key partnering, Nicholson's skill in defining imaginative futuristic worlds coupled well with Gaffin's eye for detail, whether in space or in Earth's spaces! "Andy is focused on the story and he is very good at refining his beautiful designs to make them believable, while totally understanding VFX and communicating with the director and cinematographer! Whether it's a location or a set, future or past, he explores all the possibilities to create the most effective solutions for the film."

"And it all comes together because of our incredible crews. The diligence and commitment of my team...and their skills and knowledge!

I rely on my brilliant Leadman Anthony Carlino, as I have for so many productions. His understanding of the mechanics of a large set and his solid confidence in getting things done provide an anchor even in the wildest of situations. And our guys always come through for us...as does Buyer Sara Gardiner-Gail and our team of Buyers and Set Dec dept.

They all rise to the challenge every time, no matter the size or requirements, and they keep a sense of fun and willingness in each project we take on.
Their enthusiasm and dedication and camaraderie is amazing...they are my soul on a film."