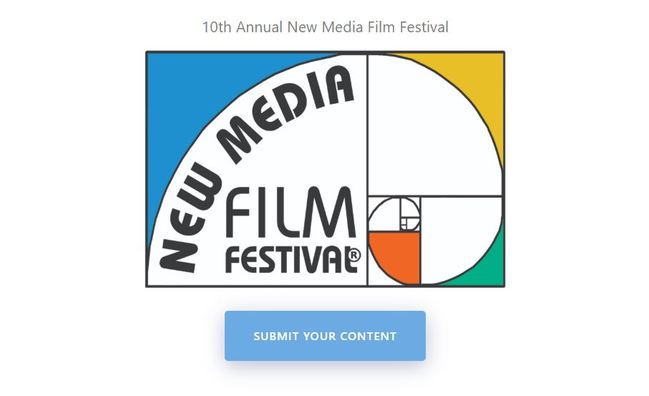 The New Media Film Festival is an annual event that celebrates the "interactivity of new technologies and new media and film formats worldwide". According to the organizers, the festival pays tribute to "Storytelling stories that are created by people of all ages?-?from all cultures and all media". Featuring animated and 3D short films, web series, mobile media, apps, and music videos, awarding prizes worth more than $45,000 and offering distribution to non-traditional and web-based filmmakers of the digital age.

Susan Johnston founded the New Media Film Festival in 2009. She is known as a media futurist and is currently the president of Select Services Films, Inc., a film production company. As a child, Susan was on the Great Gatsby Plateau (1949), where she met Robert Redford while his father was handling old cars.

In 2009, the New Media Film Festival was announced in Second Life as part of the C3?-?United Nations Millennium Project as an annual event.

Features of the event

The event features more than a dozen selected submissions from around the world, often featuring well-known actors and industry professionals, as well as young filmmakers. The Festival also includes world premieres and focus groups. The films submitted to the Festival are screened by a jury composed of Pixar, The Caucus, Lorne Lanning, Spencer Halpin, and Industrial Light & Magic, as well as numerous other winners and Oscar, Grammy and Sundance nominees.

Now in the spotlight is the 10th edition of the New Media Film Festival, which is producing a high-end, upscale, high-end festival dedicated to future and seasoned content creators. More than 20 competing categories are open and celebrate a wide range of stories?-?podcasts, web series, tablets, virtual reality, augmented reality, drones, 3D and so on. Huffington Post aptly describes the festival: "Makes the avant-garde accessible."

In 2018, the Festival presented 110 projects from 40 countries, with 34 world premieres, 7 American premieres and 24 premieres of Los Angeles. Matthew Modine, SAG, and Golden Globe winner, said, "New technologies have allowed studio and network creators to create their own movies and develop cutting-edge entertainment. Affordable cameras and editing software allow artists to create and express their skills on many new distribution platforms.We are currently witnessing the redefinition of narrative in the 21st century. The New Media Film Festival highlights and implements value in the following events. "The festival expands its forward thinking to promote a positive future and proudly honors fixtures with its ecologically socially responsible conservation award. In 2018, the prize was awarded to Jeff Bridges.

Judges at the New Media Film Festival include HBO, Marvel, Academy of Arts and Cinema, Television Academy and other pioneers in the entertainment industry.There is even a competitive category for Snipers: 30-second mini-trailers that catch the attention of unrealized films. Filmmakers compete for $45,000 worth of services and prizes. The festival also offers other projection possibilities to award-winning works on 2D and 3D new media channels, as well as other distribution opportunities.

Honoring stories that are worth telling, the New Media Film Festival brings the best of new media in the world.

More About The Festival

The rationale behind the festival is clear. New media continue to show their enduring power and evolution potential?-?there is room for truly innovative and compelling work in the world of storytelling. The festival is designed to discover and cultivate the highly creative work of emerging and seasoned content creators. The filmmakers will benefit from a Red Carpet press room, a VIP night, a Web Series Superstar panel, live music, technology panels, a networking lounge, an international art exhibition, questions -responses, public awards, etc.

Showcase your innovative work and join the unique community of content creators at the New Media Film Festival. Submit today and join us from June 4 to 6, 2019!