Vancouver, BC -- Acclaimed creature FX studio MASTERSFX has just earned a 2019 Daytime Emmy Award nomination for "Outstanding Makeup" for its work on the Netflix movie "Aliens Ate My Homework. Todd Masters, Founder and President of MASTERSFX, also served as a Co-Producer of that project, along with Producers Roger Lay, Jr., and Eric Carnagey of Lay-Carnagey Entertainment. The 2019 Daytime Emmy Award winners will be announced on May 5. 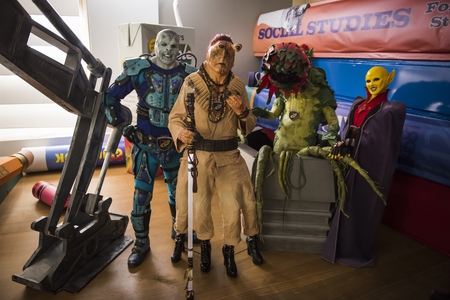 Cast of Aliens Ate My Homework
For the project, MastersFX designed and created the film's title aliens. Starting with a series of concept illustrations, Masters and his team developed the original images from Bruce Coville's book. "We all loved Katherine Coville's art - from the books - and we wanted to expand on those ideas, in their cinematic-form," Masters says. 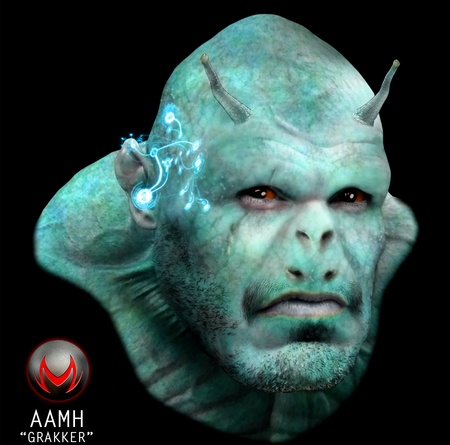 Grakker
"Since I was one of the producers, and working with a tight budget, we were able to cut a million corners - quickly getting designs approved, our FX builds were started early on, and our alien cast members were hired fast. We even managed to sneak one of our longtime studio supervisors, Brad Proctor, inside a plant, to portray the role of 'Phil the Plant!' His part was later voiced by William Shatner," Masters adds. 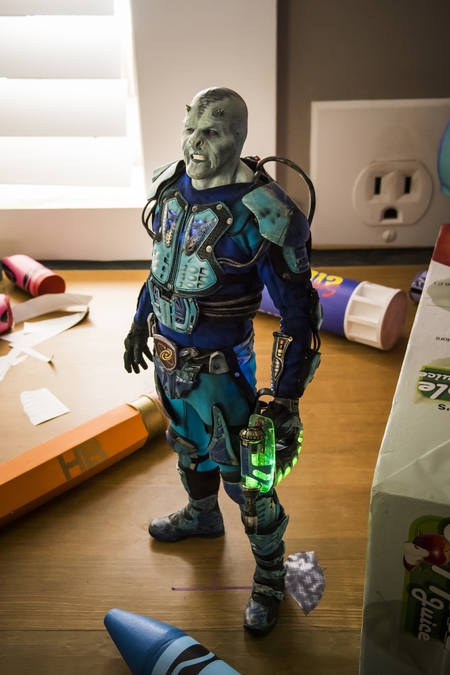 Grakker
Other members of the film's "Galactic Patrol" cast were: the graceful and powerful "Madam Pong," portrayed by Tristan Risk ("American Mary," "Rabid," "The Editor"); Alex Zahara as "Tar Gibbons" ("Stargate," "iZombie," "The Man In the High Castle"), and Dan Payne ("Watchmen," "The Flash," "Star Trek: Beyond"), as "Grakker," a blue-faced alien soldier who has a behavior module for nearly every personality. 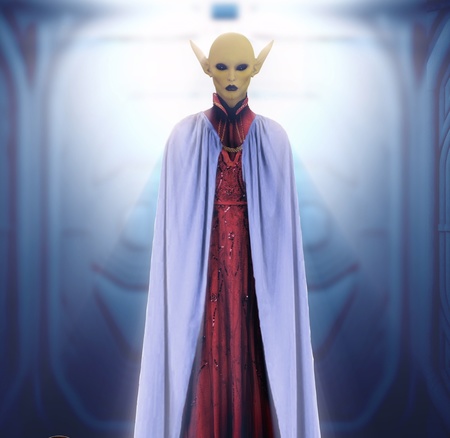 Madame Pong
"We got very lucky with our aliens cast - everyone was perfect and amazing," Masters continues. "We were lucky to be able to invite them in early, as we had done several projects with each of them and knew they'd be perfect for these characters. Working with the rest of our MastersFX team, developing these characters was an amazing and fun process. We had to pinch ourselves - everyone that we wanted for this project was just as excited as we were." 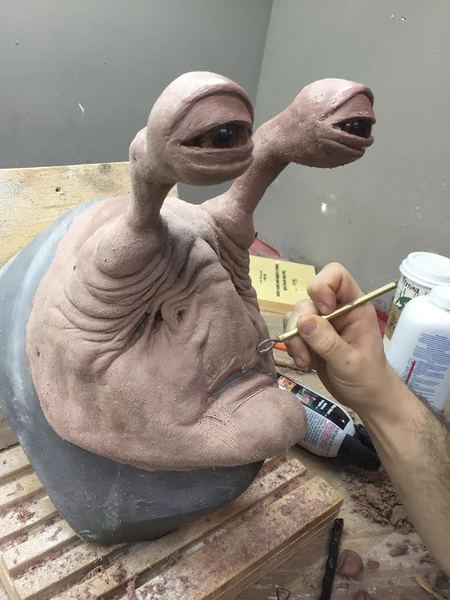 Tar Gibbons Sculpture
In addition to the puppets, prosthetics, and animatronics work MastersFX traditionally contributes to the films and TV projects for which it is involved, the team also designed and created the alien costumes, weapons, and a variety of props for "Aliens Ate My Homework." "Each of these characters evolved in our makeup and dressing rooms, after a few costume fittings. Each performer would come by and we'd literally start building on them, embellishing their costumes with a variety of additional items. As each member of the 'Galactic Patrol' is from a different part of the universe, our team made sure each actor had his or her own look, style, color and feel."

"Normally, so many of these character FX would have been nearly impossible given our tight budget. But since we were so personally invested in the project - and all such big fans of Bruce Coville's books - we insisted that everyone on the team gave it the old 'Get'r done' attitude, and just have fun. For all of us, it was truly the love for the project that got this made - and the Emmy nomination is the topping on the cake!" Masters concludes.

Said Lay and Carnagey, "From the very start of this project, we set our sights on making sure that every aspect of 'Aliens Ate My Homework' would make young viewers believe in the wonder of the story so they would want to be a part of this adventure. Todd Masters and his team at MastersFX helped us achieve that by surrounding the cast with wildly imaginative practical creatures that could perform and interact with our cast without any limitations. As longtime fans of Todd's work, we can say that working with him on this film was a dream come true."

Lay-Carnagey Entertainment and Todd Masters are already collaborating on another film project - details of which will be announced soon.

About "Aliens Ate My Homework"

Extraterrestrials invade Earth and a pair of middle schoolers hold the fate of the world in their hands in "Aliens Ate My Homework," a delightfully comical intergalactic adventure from Universal 1440 and Lay-Carnagey Entertainment, directed by Sean McNamara, which debuted on Netflix during 2018. "Aliens Ate My Homework" is based on the first book in the wildly successful Rod Allbright and the Galactic Patrol series. Written by internationally renowned author Bruce Coville, the four-part saga has sold over 17 million books worldwide and has been translated into 16 languages.

When a tiny intergalactic starship crashes into the bedroom of 12-year-old Rod Allbright (Jayden Greig), it's the start of the adventure of a lifetime for him and his cousin Elspeth (Lauren McNamara). Enlisted by the extraterrestrial Galactic Patrol, a group of out-of-this-world lawmen, Rod and Elspeth must race to save the world from Total Planetary Disaster. The film features the voice of "Star Trek's" William Shatner as the intrepid intergalactic explorer known as Phil the Plant.

MASTERSFX's creative teams produce a unique blend of practical and digital makeup and special FX, prosthetics and animatronics, through a process called "dMFX," for hundreds of hit feature films, TV shows, and commercials. Creators of the cadavers for "Six Feet Under," vampires from "True Blood," Borg FX for "Star Trek," and the baby makers from "Look Who's Talking," MASTERSFX has been contributing its blend of custom practical and digital FX to a wide range of TV and feature film projects for nearly 30 years.

The company also supplies dummies and detailed FX props for studios to rent, and custom and stock temporary tattoos, as well as their unique, fast-apply prosthetic system, ProGASH.

Included among the recent TV projects to which MASTERSFX has contributed its work are "Handmaid's Tale," "The Magicians," Netflix's "The Order," "The Good Doctor," "The Umbrella Academy," "The Flash," "This is Us," and "What We Do in the Shadows," and historically, "True Blood," "Six Feet Under," "Tales from the Crypt," "Fringe," and many others. Among the company's upcoming film credits are "Child's Play," "Sonic the Hedgehog," "The Perfection," Disney's "Timmy Failure," the 2019 version of "Rabid," and historically, "RoboCop," "The Day the Earth Stood Still," "The Haunting in Connecticut," "Star Trek: First Contact," "The Horse Whisperer," "Slither," "Snakes on a Plane," "Buffy the Vampire Slayer," "Look Who's Talking," and dozens more.

A multi-award winning FX artist, Masters is the winner of 2016 Leo and Daytime Emmy Awards for "Outstanding Makeup" for the Netflix series, "Monsterville." He is also the winner of an Emmy Award in 2003 for the 2001/2002 Season of "Six Feet Under" in the category "Best Special Effects Makeup." In 2006, MASTERSFX won a "Saturn Award" for "Best Make-Up FX" for its work on the film "Slither." See more at: www.mastersfx.com