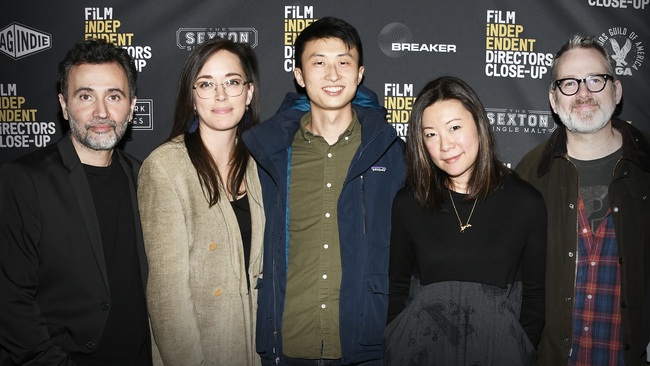 Why are documentaries so important? They have the power to alter perspectives, to provoke and educate audiences in a way that's compelling and inspiring, even.

Week Three of Film Independent's 2019 Directors Close-Up series featured five filmmakers whose recent nonfiction films all managed to bring us closer to the truth with their deeply engaging, real-life narratives. The February 13 panel-titled Another Type of Narrative: The Truth of Docs-was moderated by Award-winning director Lisa Leeman, herself no stranger to intimate character-driven storytelling by shining a light on social issues, in films such as One Lucky Elephant and Out of Faith.

THE TRUTH OF DOCS 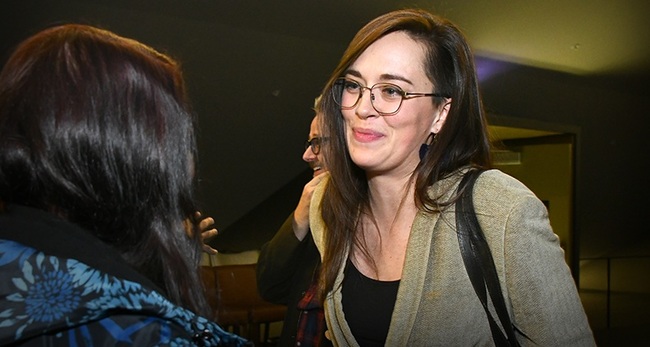 'On Her Shoulders' director Alexandra Bombach at the post-panel reception at Film Independent's Directors Close-Up
On Her Shoulders is a film about Nadia Murad, a Yazidi woman-"the face of the Yazidis," Bombach said-a victim of sexual slavery and genocide at the hands of ISIS. "I heard her [Nadia] speak at the 2015 Security Council," said the director. "I immediately wanted to hop onboard because I was very interested at the time about stories of storytellers and how the world is interacting with issues of trauma, but also advocacy."

"The last film I made was about Afghan photographers, so thinking about perception-who's telling what story and how we're telling it-is very important to me," said Bombach. Knowing Nadia would have already been on a human rights campaign for eight long months prior to the time filming started, she said, "I watched 25 different interviews with her and was pretty horrified at thinking about how many times she had to relieve this trauma, and of the survivors guilt."

So what did Bombach want to accomplish? To ask, through the film: "Why are we making this woman go through this at all? Why can't we just do the right thing?" 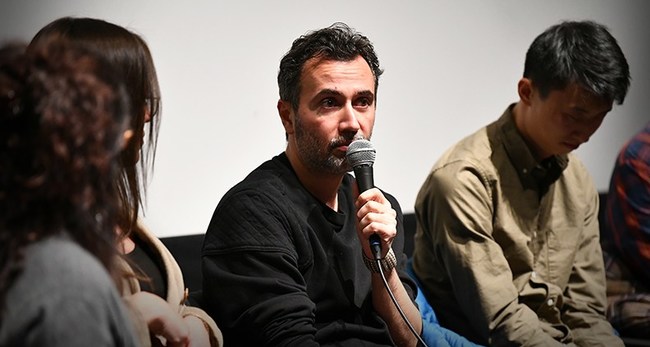 'Of Fathers and Sons' director Talal Derki
Literally risking his life to make Of Fathers and Sons-embedding himself undercover with a radical Jihadist family for an extended period of time-Derki said, "There are two questions that always haunt you [before starting a new nonfiction film]: 'What your film should be about?' and second, 'Will I get the right access to the story?'"

One of the "big questions" after shooting for Derki, he said, was following how his main character became a Jihadist. "I was with him for years and he didn't mention [how he was radicalized] to me." He continued, "Watching children, young teenagers [involved in Jihad], it came to my mind to make a film about the uprising of the Salafist Jihadi movement in general."

Derki articulated why he wanted to make this film, putting himself in danger in the process. "It's the biggest phenomenon, the rise of radicalism and extremists, in our modern world. I have to tell the people: wake up"-to showcase that we're living through dangerous times in nearly all parts of the world, a reality not everyone is cognizant of, particularly in America. 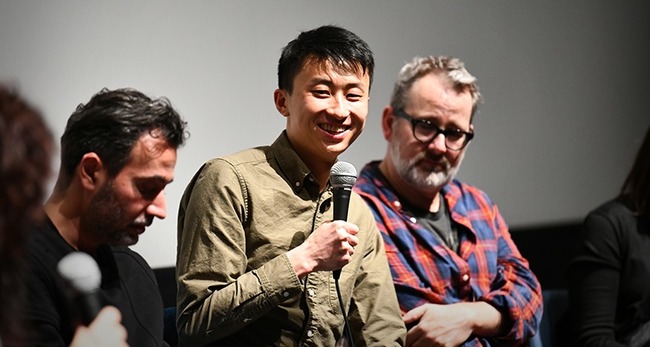 Bing Liu, director of 'Minding the Gap' and Film Independent Documentary Lab Fellow
Leeman asked Liu the origin story behind the autobiographical Minding the Gap-a chronicle of Liu and two close friends growing up in economically depressed Rockford, IL, finding (at least partial) salvation away from their troubled home lives via skateboarding.

At 23, he said, "I was witnessing people around me struggling to grow up and struggling with self-destructive behaviors, sometimes to a point where it ended their lives," Liu said, adding: "As I got older, I felt like as hard as I was trying to not become my [abusive] stepfather. I was like, 'What if it happens anyway?'" he said.

Liu traveled around the country for one year and interviewed skateboarders from different communities. "We had a lot of conversations that were really tender and vulnerable," he said. "One clear pattern was that a lot of people came from households that had a lot of trauma in them." Liu saw elements of his own story in those of main characters Zack and Keire.

The resulting film is a compassionate coming-of-age story unified by a deep love for skateboarding. (Also, Minding the Gap was also directly supported by Film Independent's Documentary Lab and Fast Track programs, and is already the winner of Film Independent's Truer Than Fiction filmmaker grant.) 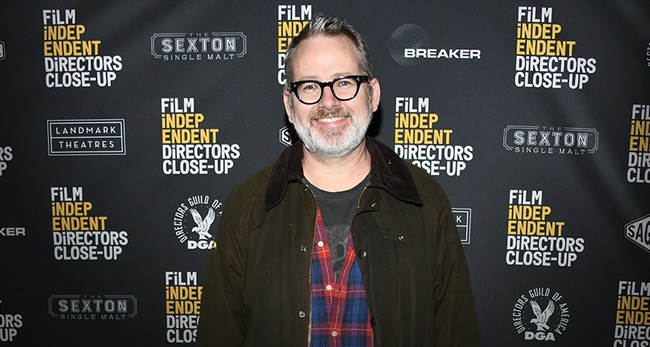 Veteran filmmaker Neville (20 Feet from Stardom, Best of Enemies) said this about how he choses projects: "Right now, my criteria for making a film is a film that I can't imagine not making." The subject has to move Neville emotionally, just as his latest film highlighting Mr. Fred Rogers did. "He's [Mr. Rogers] the quintessential two-dimensional character and has been a cultural punch-line for decades," adding, "and what I was feeling was: nobody saw what was really there."

Part of what the Won't You Be My Neighbor director responded to was, "He's [Mr. Rogers] the antithesis of cynicism. His superpower is sincerity. When you see that honest sincerity unadorned it just touches you." Thus, Neville really wanted to examine the life of Mister Rogers-to amplify that message of sincerity and vulnerability. 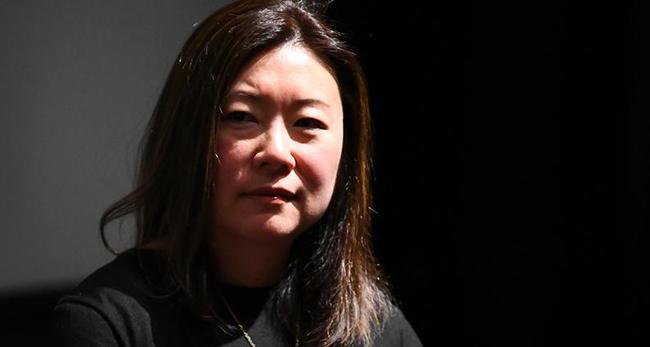 'Shirkers' filmmaker Sandi Tan
What do you do when the footage of a film you and your teenage friends made over 20 years ago resurfaces-out of the blue-after its disappearance? You investigate! says Shirkers director Tan. "Suddenly, this ghost is back in my life, and I have to deal with it," she said of the highly personal film, which chronicles the making of her indie film debut in 1990s Singapore, its theft by a mysterious "mentor" with inscrutable motives, and the film's eventual resurfacing in Tan's life as an adult.

"I knew it would destroy me psychically, financially, spiritually-and it did!" Tan said of her documentary. But, she said, "That comes with making a film. It should destroy you." "I was compelled to [make this film] because how could you not answer the call to adventure?" She added: "I dived in as an excuse to solve this giant jigsaw puzzle that was missing in my life, this black hole that was gathering moss for 20 years." With that, this call to adventure was Tan solving the mystery, once and for all, for herself but also-in her own words-"giving everybody involved in this a chunk of their lives back."

As Leeman emphasized, documentary filmmaking is deeply soulful work. You must engage your soul in documenting reality and real-life characters for the purpose of inspiring change, starting an important conversation or answering a "big" question, which all starts with examining the truth. So go on, seek your truth.