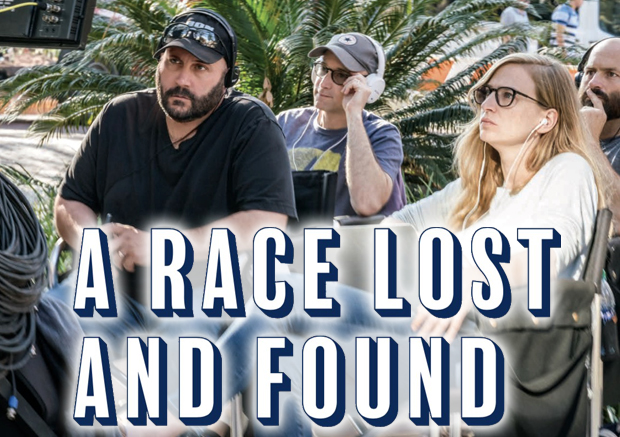 Politics have become synonymous with division. Toxicity abounds, animosity trumps altruism, and truth is just a carcass in the rearview mirror as we careen further down the forked road of our bifurcated democracy.

So how do you navigate this divisive landscape to tell a political story in the age of us vs. them? Answer: You have the audacity to be human.

That is the brilliant subversion of The Front Runner, the new Jason Reitman film produced in partnership with his trusted collaborators Helen Estabrook and Aaron Gilbert. Their movie revisits the sex scandal that derailed Gary Hart's political aspirations in 1988, but the producers eschewed the exploitation angle in favor of true intimacy.

"I think that we get used to talking about stories in a certain way and forget that we're talking about people," explains Estabrook. "One of the things that I like about this film is that we're not talking current politics ... Being able to look at this through a different lens and have these conversations and ask relevant questions, also to talk about them in the realm of past events is really helpful." It was a creative challenge fraught with obstacles and opportunities. "The nice thing about a story of this era is that we actually have a lot of resources to look at: documentary footage, interviews from that time, all of the actual videos from the Gary Hart campaign. So we could really look at what was most authentic from that time and find the right cameras and find the right look of the sets."

"It's movie magic! It's movie magic!" Gilbert exuberantly concurs. "For me, The Front Runner captures such an important time in the history of America ... a man who literally could have been an incredible president of the United States was taken down because of this situation that happened over a few weeks' period." Gilbert surmises, "Everything that took place around Gary Hart at that time during the presidential election had never been experienced or talked about in that way before."

Striking a reflective tone, Estabrook adds, "We were exploring how someone could go from being the presidential front-runner to leaving politics in three weeks. We were exploring how it felt for journalists and a candidate to find themselves in a dark alley for the first time and no one having any idea what to do."

Estabrook is not being metaphorical; that actually happened. One of film's most jaw-dropping sequences recreates the moment when Hart faced off with reporters in the shadows of his D.C. townhouse-a historic flashpoint in the eternal struggle between politicians and pundits. "This is the first moment where tabloid journalism and political journalism really drove into the same lane," assesses Estabrook.

Their writing team reflects this chaotic dichotomy. The Front Runner was scripted by Reitman, veteran political reporter Matt Bai and Democratic strategist Jay Carson. "Having those two not only co-write the script but having that direct experience for all those years together, they just brought so much real life into these roles," says Gilbert.

"Accuracy was always key for us," asserts Estabrook, who details how painstakingly every background actor was prepped. "They were all given packets of magazine and newspaper articles from 1987. Everyone was really focused on trying to create this reality of that time period." 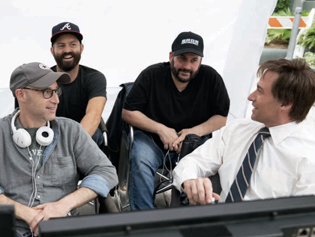 Aaron Gilbert (center) discusses a scene with cast member
Hugh Jackman (right) and writers/executive producers
Matt Bai (left) and Jay Carson (back left).
Reitman takes it a step further, recalling how they edited together vintage clips for his cast to study on set. "When an extra comes in, a background actor, and they're gonna be doing a scene on a plane that morning, they watch footage of journalists on planes in the 1980s, so they know exactly what to do. It's about the prep work and being dedicated to this larger sense of truth ... We wanted this to be a movie that just dropped the audience onto the campaign trail."

To replicate the epic sprawl of a presidential trek across America without actually spending a billion dollars, the producers cobbled together a peachy plan. "We shot this entire film in Georgia-in Atlanta and in Savannah," reports Gilbert. "We were able to find and dress and create an environment that had the scope and had that feeling of indeed crossing the country, and showing Colorado and showing New York and showing Florida and showing all of these other things. It's really just a testament to Jason's eye, of course, and the incredible team that we had around him."

Reitman himself singles out one noteworthy member of said team, production sound mixer Steve Morrow. "Steve was wiring 10 to 20 actors at a time, every single day, and live-mixing all of these different conversations. Oftentimes the mix that you hear in the finished film was the one that Steve was doing on the day, and it was kind of surreal to be on set with our headphones on, hear the movie come to life and already feel ourselves as an audience trying to pick which conversation we want to follow."

But the pivotal scene depicting Gary Hart's inaugural rendezvous with mistress Donna Rice features no dialogue at all. Their words fade away, yielding to the strains of the pointedly chosen selection "Foreplay", by Boston. "Jason is always very specific about the music that he wants in his movies," chimes Estabrook. "I think the trick for this movie was finding the music that felt of a time but didn't feel too on-the-nose '80s because I think we're all so aware of what '80s music sounds like, and it almost puts it in a less authentic place in a weird way because it just blasts those synthesizers." Instead their goal was "keeping within the emotional scope of the film and finding the music that works there while also being of a certain time. I think that we ended up leaning more on '70s music because there was a sort of '70s aesthetic to the film."

The result is a soundscape worthy of Robert Altman, a comparison that Reitman graciously welcomes. "We wanted to make this film in as analog a way as humanly possible and try to use technology that was available in the '70s, similar to the films we were trying to emulate. So almost all the things that happen on screen were done as real-time playback that the actors could watch."

A standout example of this dynamic is the scene featuring Hugh Jackman as Gary Hart, alone at home, watching TV as he's being skewered in a classic Tonight Show monologue. "It's a weirdly intimate scene because it really is just him in a room by himself with the television. Filming that felt much more intense than I expected it to," admits Estabrook. "Often in screenings, the monologue gets a big laugh, and it's always amusing to me how timeless Johnny Carson can be." Of course comedy may be the great equalizer, but the film slyly utilizes our ease with laughing at Carson to make us complicit in the public spectacle that unraveled the career of a public servant. 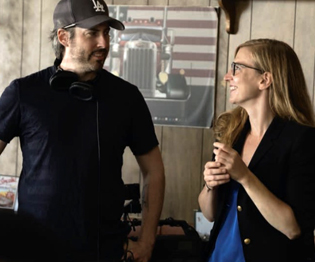 Helen Estabrook confers with writer/director Jason Reitman.
Jackman's performance humanizes Hart, imbuing the philandering presidential candidate with a quixotic blend of charisma and regret. "One of the greatest things that we got from this experience was working with Hugh Jackman, who is one of the most amazing actors but also just such a great presence on set," recounts Estabrook. "If he ever runs for office, we're all volunteering for his campaign, I'll tell you that right now." Gilbert echoes her sentiments with a hearty, "I'm in! I'm in!"

His enthusiasm extends well beyond Jackman to the rest of the ensemble. "It's sort of an embarrassment of riches, this cast. All the way through, everyone was so wonderful." The roster includes veterans of Reitman's troupe like Vera Farmiga and JK Simmons. Estabrook quips, "We sort of half-jokingly say that JK is Jason's muse, because he's managed to be in almost every one of his films thus far."

Reitman is fiercely loyal to his cast and crew, heaping the lion's share of praise on his producing partners in particular. "When it comes to Aaron Gilbert, he has been a savior on my last couple of films. As you can tell, I don't make easy films. I don't want to make easy films. I want to make films that are tricky and complicated, and Aaron has been a thoughtful supporter of filmmakers and actors and complicated projects." Summing up, Reitman deems Gilbert "a real director's producer."

And his admiration for Estabrook dates back even further. "Helen Estabrook and I have been working together since Up in the Air, and she challenges me on every film to be a better director. We've been having, specifically, a conversation about gender since basically from the moment I met her ... I think it's the reason why the women in The Front Runner are as compelling as they are. Helen would say to me, 'You have to remember the particular burden that lands on the shoulders of women in the midst of a scandal.'"

As if finishing his sentence, Estabrook elaborates, "We talked a lot about the emotional labor that is expected of women because they are often asked to do the caretaking, whether or not they asked to be put in that role."

Extrapolating, Reitman applies the greater gender conversation to the considerable achievements of his friend and producing partner. "We talk about what it's like to be the only woman in the room, whether it's at a newspaper or on a campaign and how challenging it is to feel like you're representing your entire gender.

"I've just been very lucky that I met both Helen and Aaron," extols Reitman. "They are supportive of me as an artist, storyteller and filmmaker. I don't know how I would do this job without them. At the end of the day, finding your producing partners is like finding someone to fall in love with."

Reciprocating the feeling, Gilbert beams, "There's a difference between a director and a filmmaker and to me, Jason is the latter." Theirs is a mutual respect galvanized in creativity, and their work ethic infuses the crew at large. Gilbert opines, "You sure as hell better love what you do in this business, 'cause it ain't easy. That's the same thing with these incredible men and women we follow in our film; they were all driven by something a little bit bigger than themselves."

Estabrook triples down on the humanity of their endeavor. "We're not trying to make anything that's an allegory in any way. It's really just ... seeing this pivotal moment in American history, what that looks like for all of the many people involved, not just the people who are most often talked about but all of the journalists, all of the campaign staff, all of these people who were part of this moment." Surveying a job impeccably done, Estabrook concludes, "I don't think we even knew we were going to make something that felt so relevant."

The Front Runner is a modern reminder that our empires are mere sandcastles, and we are the grains. Each wave systematically tears us down as much as it brings us together. "Our hope with our film is that we provoke our audience to take a stance and look a little harder at who our leaders are and what makes somebody a leader. What are the traits that we want?" Gilbert asks prophetically. "What are we OK accepting from our leaders? What kind of behavior is OK?"

Invoking the medium's immense powers of community and curiosity, he makes a final declaration. "We always hope that when people leave The Front Runner, they'll start having conversations and asking questions. That's really the power of what film can do."