Thanks to a Simi Valley film studio, movie ranch will be built on Wast

Thanks to a Simi Valley film studio, movie ranch will be built on Waste Management land 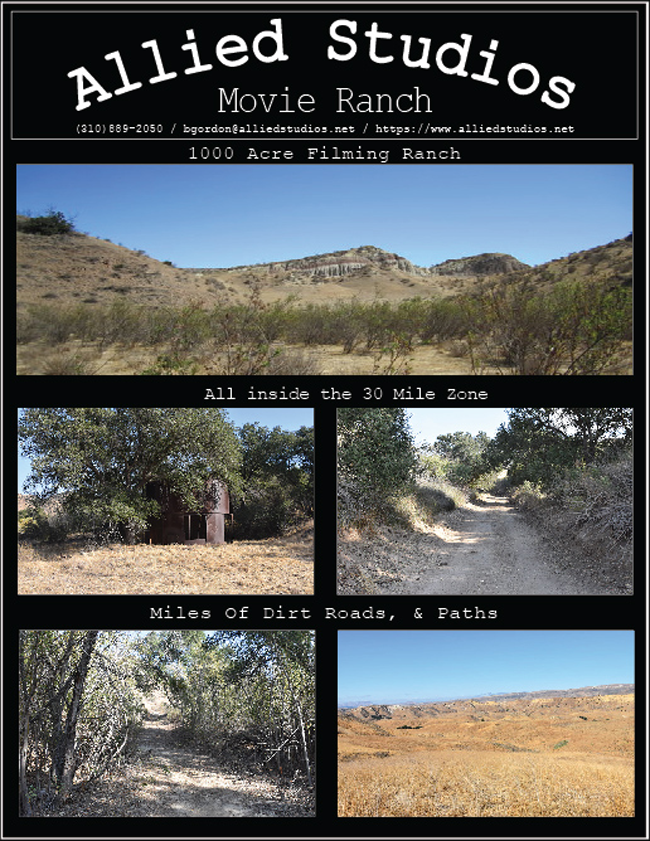 Allied Studios in Simi Valley has entered an agreement to use about 1,000 acres of Waste Management's scenic open space just outside the city as a movie ranch.

Both Allied and the city say the new filming site on unincorporated Ventura County land will create jobs and bring other economic benefits to the area.

Temporary filming at the site would simply require a routine permit from the county and could begin as soon as a production company's project is green-lighted, Allied officials say.

If permanent structures are ever planned for the site, Allied would need more involved permitting. But Allied officials say no such structures are envisioned at this time.

"Right now, it's just an open back lot," said Brian Gordon, Allied's managing director. "That's all we really have in the works now, a movie ranch. Who knows what the future holds."

A movie ranch is a scenic, sprawling outdoor location used for filming motion pictures and television productions, many of them Westerns.

City officials say any permanent structures would likely lead to the site being annexed by the city. The land is within the city's "sphere of influence" and is considered part of its planned growth area.

The agreement includes an option to buy, Gordon said.

The Simi Valley area has a long association with the entertainment industry, including the area's former Corriganville Movie Ranch, where many Westerns including "The Adventures of Rin Tin Tin" and the "Lone Ranger" were filmed in the 1940s and 1950s.

Besides Allied's just-announced movie ranch, the area has another working movie site, the Big Sky Movie Ranch, just outside Simi Valley, where, among other productions, the HBO series "Westworld" has been filmed.

Allied's movie ranch, on the east side of the Waste Management landfill operation, is about 10 miles from Allied's movie studio facility, which it has run since about 2003 at 6800 Smith Road on the city's east side, Gordon said. In recent years, Allied expanded the Smith Road site and built a backlot on an adjacent 9.1-acre parcel.

The agreement with Waste Management represents yet another expansion of Allied, whose facilities such film production companies as Hallmark and LLP Production Services use for their projects.

Allied envisions an environmentally friendly movie ranch, bringing hundreds of well-paying film production jobs starting this year to Simi Valley and east Ventura County, while preserving most of the Waste Management site as open space, according to the city.

"We're glad that we were able to reach an agreement with Waste Management and greatly appreciate the cooperation of Waste Management's local leadership, Mike Smith and Larry Metter, and the city of Simi Valley, in bringing this project forward," Gordon said. "I know that as we move forward we should see a substantial boost to the local and regional economy.

Gabler said the city has been working for years to increase the already large amount of filming in the area.

"We embrace the entertainment industry," he said. "This effort is really an extension of the city's desire to work with the industry."

The deal with Waste Management gives Allied "a larger presence, to expand its operation and to bring quality, high-paying, clean (film production) jobs to the Simi Valley area," he said.

Gabler said filming at the new movie ranch will bring other economic benefits to the area as well.

"Every film crew can be upward of 60-150 people," he said, "So, every time there's filming out here, you've got that many people in your community filling their tanks with gas, shopping, and everything else.

"And having that (filming) activity here also creates opportunities for other related industries to locate out here too; post-production facilities, smaller studios, etc.," he said. "So, there are secondary benefits too."

The deal will result in "increased filming in the Simi Valley area," Foy said.

"Simi Valley is within Hollywood's Thirty Mile Zone or "TMZ," and this agreement will no doubt bring hundreds of new well-paying jobs to our area," he said. "I am hopeful this could even evolve into a large scale outdoor film production area like the Disney (movie) Ranch in Newhall" in Los Angeles County.

Simi Valley Mayor Bob Huber, who is running for the seat of the retiring Foy, said the city has "been working with both sides for a long time to bring our community the right project at the right time. The entire City Council recognizes the benefits that film production beings to our community."

Councilman Glen Becerra said he was instrumental in Simi Valley becoming the second city in the state to adopt the California Film Commission's Model Film Ordinance, a standardized statewide ordinance to streamline the film permitting process.

The city adopted it in 2012, he said, "with the goal of making Simi Valley a film-friendly city, where companies like Allied can take advantage of that environment to expand, and promote filming in our community."

Smith, director of operations for Waste Management's landfill and recycling center, did not return a call seeking comment on the agreement with Allied.