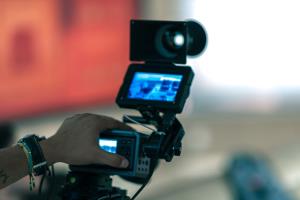 Engaging all of the senses on a one dimensional plane takes incredible talent, a vision and a little Blackmagic. Through filmmaking, director Jorge Díaz Fernández, photographer Daniel Zanco and producer Mariano Bravo pull off the improbable, planting the grain of a commercial idea and growing it into a story.

The three co own AIMA FILMS, an agency that forgoes traditional film shooting in favor of marketing through art. This emotional tug sets the young entrepreneurs apart. They each bring their own experiences into their work, be it a love of the horror genre or an aptitude for designing clothing, and they host weekly brainstorming sessions to work them all together into trial art projects.

"We do a lot of experimentation with these art pieces, and if it works, we apply them to our commercial projects," Jorge says. "But first, we try to make all of the real 'mistakes' so the experiments can eventually turn into the things that the clients love the most."

As they've stretched the boundaries of creation, they've come to be recognized globally as the next generation of artists. Powerhouse companies including Sears, and Condé Nast publications such as Audi, GQ and Vogue now regularly reach out to the team with commercial inquiries. Most recently, AIMA FILMS completed a spot for the new Levi's campaign, "Live in Levi's." The project gathers celebrities, artists and designers from around the world and shows how they work and express themselves in Levi's jeans. When Levi's contacted the team to shoot its Mexico spot, Jorge knew he wanted to film it on the Blackmagic Pocket Cinema Camera.

"Levi's is a cool company to work with," he says. "Their personality is rebellious and open minded, so we used a lot of our experiments in those videos. They came out pretty awesome. We filmed with reference to the videos from the States, and we were trying to achieve a grungy look. We specifically chose Blackmagic to make this. It was the only camera that would support the type of color correction and grading needed to get that grungy look."

The team is adding to their Blackmagic Pocket Cinema Camera experience an Alfa Romeo editorial for Life and Style, which is currently in the cutting room.

"We are getting more and more confident using Blackmagic DaVinci Resolve in post and with this confidence, decided to shoot the Alpha Romeo editorial in RAW format because for us, shooting in RAW really gets the most of the Pocket Cinema Camera," Jorge says. "We also believe that because Blackmagic's RAW feature is such a powerful option, we were wasting the true capabilities of the Pocket Cinema Camera by not using it. This was the perfect time and project. Shooting a car both in still and moving images was an incredible way to experiment with lines, textures, light and shadows because you can really get the car's 'personality' and enhance its design, so having true control over those elements was key and RAW was the best option."

The Blackmagic Design Pocket Cinema Camera allowed Jorge to get shots he typically wouldn't have been able to achieve when using a different camera. Because it is small and sleek, he uses it for Guerilla style filming. Shots are often simple and shot quickly due to strict regulations, especially in Mexico.

"Filmmakers get a lot of probations for shooting outdoors and in streets, and for shooting monuments and landscapes, so the Pocket Cinema Camera has helped us get great hits for those kind of shots," he says. "It doesn't look bulky or expensive, so we use it with a little lens and without the cage to shoot. It's a great advantage. You can do some stealthy shots without compromising the quality."

At AIMA FILMS, even quick shots take an enormous amount of thought and care. The Blackmagic Pocket Cinema Camera supports this workflow, allowing the team to look at each shot from every angle, in every capacity, before capturing. According to Jorge, it feels like a professional film environment on every set.

"You aren't just shooting random things with Blackmagic," he says. "With other cameras, you get to the editing room and you have a lot of clips and you don't know what to do with them. With Blackmagic, it's a conscious decision about what you want to film and what you're choosing to film every time. Setting up the camera for different kinds of light, locations and framing is somehow mechanic and conscious. It's not simply playing with a series of random buttons on the go. It gives you a chance to stop and think about the scene, and it really improves the rationalization of the entire scene from the beginning. I think that's one of the greatest things about the camera."

The Artist Within
Sharp minds build sharp projects, and it is not only the team's commercial portfolio that stands as a testament. AIMA FILMS has taken the lead on numerous side endeavors, all 100% homemade and 100% made with Blackmagic Design. Their flagship project is a shoot they put together documenting Michael Edmonds, an award winning American architectural designer. After getting in contact with and pitching an idea to Edmonds International, Edmonds' company, the AIMA FILMS team was given the go. Edmonds loved it.

The six minute video, called "Michael Edmonds: The Artist Within," was filmed on the Blackmagic Pocket Cinema Camera. The project took about six months to complete, including scouting, interviewing Edmonds to get a feel for his character, script prepping, and barefoot shooting in a forest area near Mexico City.

"We decided to go with the Pocket Camera because of the look that the camera delivers," Jorge says. "That film texture and feel were the key to this project. The architecture, the landscapes and the details were the main character besides Michael, so we needed a camera that was able to truly capture all those elements. Architecture nowadays is a very render based profession, where you don't get to see the architectural process in a truly crafty way because it's digitally produced. Taking that into consideration was important because we wanted to deliver a sense of reality and truthfulness about the way the buildings blend with the sky, water, nature and of course, the city. If we used a camera that was not able to achieve that, the project would have ended up looking digital and 'rendered,' and that is not the soul and mind process of Michael Edmonds. It had to look and feel real."

"The difference that sets DaVinci Resolve apart from other software is its secondary color correction," he says. "It's great because you can mask and do all sorts of good stuff. I mainly do still photography and I know Adobe Photoshop really well, so I'm happy to have all of the things I love from Photoshop in DaVinci Resolve, which aren't in every color system. DaVinci Resolve even made me a better Photoshop editor because now I only have to think about the color and what I want to change."

Ten years ago, the AIMA FILMS team would likely have had to rent expensive equipment to achieve the high end artistic look they are now known for. Jorge is falling in love with the Blackmagic workflow because it is affordable, professional and versatile.

"I think the worldwide industry has been democratized by companies launching these filmmaking tools at a better price without compromising the quality," he says. "With Blackmagic, we have the look that all production companies are trying to achieve without buying expensive equipment. Our personality here in the agency is also like that. We like to do artsy stuff, we like to experiment and we love to have a homemade feel. We find that Blackmagic cameras and DaVinci Resolve are really helping us achieve that professional look while still retaining our own.

"We're really interested in creating a voice of our own," he continues. "Our plan for the future is to choose the projects that we're interested in ... design, architecture, fashion, art, TV ads ... so we can find a stronger voice here in the industry."

With Blackmagic, it is easy for the AIMA FILMS team to embrace both the commercial and artistic sides of their passion. To show it to the world in such a distinctive way and bring life out of a flat screen is the difficult part. If their work thus far speaks to this, Jorge Díaz Fernández, Daniel Zanco and Mariano Bravo have found their collective voice already.