New 'Scooby-Doo' Movie in the Works from Warner Animation

New 'Scooby-Doo' Movie in the Works from Warner Animation 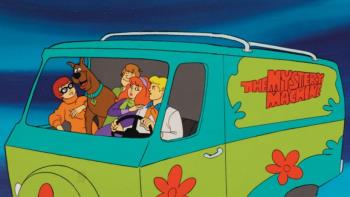 After more than a dozen years, Warner Bros. is bringing back Scooby.

For those asking "Scooby-Doo, Where Are You?" the answer is this: back on the big screen.

After more than a dozen years, Warner Bros. is bringing Scooby and his quirky crew of crime-busting kids to theatres, this time as an animated feature.

Tony Cervone, an Emmy-nominated animation vet who already has Scooby experience having directed several straight-to-own movies in the lucrative franchise, is helming the movie, which Warners has already slated for September 21, 2018.

Abbate brings a lot of animation expertise to the table, with credits including The Iron Giant, The Fantastic Mr. Fox and the Tim Burton movies Corpse Bride and Frankenweenie. (She is also married to Cervone.)

Dan Povenmire, the co-creator of the cartoon Phineas and Ferb, is also involved in a creative capacity and will exec produce. Matt Lieberman wrote the script.

Warners, which will release the movie under its Warner Animation Group banner, is hoping the movie leads to a series of movies featuring characters from the stable of Hanna-Barbera, the animation powerhouse that ruled the airwaves in the 1960s and early 1970s.

Said president of creative development and worldwide production, Greg Silverman: "Like countless fans, I have always loved the Hanna-Barbera cast of characters. As one of their most famous brand ambassadors, Scooby-Doo will take the lead in re-introducing this pantheon of enduringly popular animated stars on a grand scale with an exciting new movie.