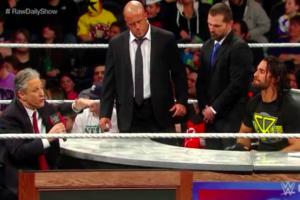 Jon Stewart is going from wrestling with hot button issues to actually wrestling.
The former "Daily Show" anchor has been named the host of WWE's upcoming SummerSlam pay per view, the company announced Monday.
Stewart, a longtime WWE fan, appeared earlier this year in a storyline in which he feuded with World Heavyweight Champion Seth Rollins.

After Stewart taunted Rollins in an online video, Rollins appeared on "The Daily Show" where he challenged Stewart to appear on "Monday Night Raw" to settle their score. Stewart accepted the challenge, delivering a low blow to Rollins after being backed into a corner.

Stewart left "The Daily Show" Aug. 6. During his tenure, he welcomed a wide array of high profile guests including: President Barack Obama; former President Bill Clinton; Clint Eastwood; Halle Berry; Ben Affleck; Jon Bon Jovi; Bruce Springsteen; Derek Jeter; Shaquille O'Neal; Bill Gates and many more.
Stewart is the latest celebrity to get involved in the WWE pay per view. "Arrow" star Stephen Amell attended a taping of "Raw" last week where he was attacked by WWE superstar Stardust
.
Following the incident, Amell and pro wrestler Neville, who was also attacked by Stardust, demanded that WWE executive Triple H allow them both to seek revenge. Triple H eventually relented, saying that Amell and Neville would face off against Stardust and King Barrett in a tag team match at SummerSlam.
This year SummerSlam has been extended to a four-hour broadcast plus a one-hour pre-show beginning at 6 p.m. ET on WWE Network. The event will also feature a rematch between wrestling legend The Undertaker and Brock Lesnar, who famously ended The Undertaker's undefeated streak at Wrestlemania in 2014.