Air Hollywood Announces the Launch of "The Pan Am Experience"

Air Hollywood Announces the Launch of "The Pan Am Experience"

Air Hollywood, a Los Angeles based motion picture studio specializing in aviation-themed content, and Anthony Toth, film & television aviation prop master, together announce the launch of The Pan Am Experience ® a service that promises patrons to ®relive the magic of flying onboard a luxurious Pan Am 747.®

Within Air Hollywood's unique aviation-themed film studio, an exact interior replica of a Pan Am Boeing 747 sits, complete with both the First & Clipper Class Cabins and Pan Am®s famous Upper Deck Dining Room. The airplane is outfitted with all the furnishing of this golden era of travel, including the classic spiral staircase that connects First Class to the Upper Deck as well as all the cabin d®cor that made the airplane so special, including authentic China, linens, and stemware from Pan Am.

Flight attendants will provide beverage and dinner service to the mock travelers while playing a movie from the overhead projection system. After the ®flight®, patrons can peruse a vast collection of airline memorabilia, shop for licensed Pan Am merchandise, and visit Air Hollywood®s other movie sets and props used in hundreds of films, television shows, and commercials for the past forty years including the original cockpit used in the Paramount Pictures classic ®Airplane!® 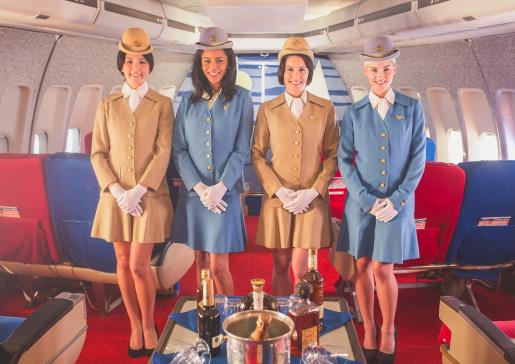 The first Pan Am Experience is scheduled for Saturday, October 18 from 6:30pm to 10:30pm, with many more events scheduled through the end of the year. The Pan Am 747 is also available for filming and private event rentals.

For more information about The Pan Am Experience, visit PanAmExperience.com.

About Anthony Toth
Anthony began his career in the airline industry in 1987 and joined Air Hollywood in 2013. He has become Hollywood®s key contributor for vintage aviation props in both television and movie production. He is well known in the industry for his preservation of the Pan Am brand and restoration of a Pan Am 747 aircraft.