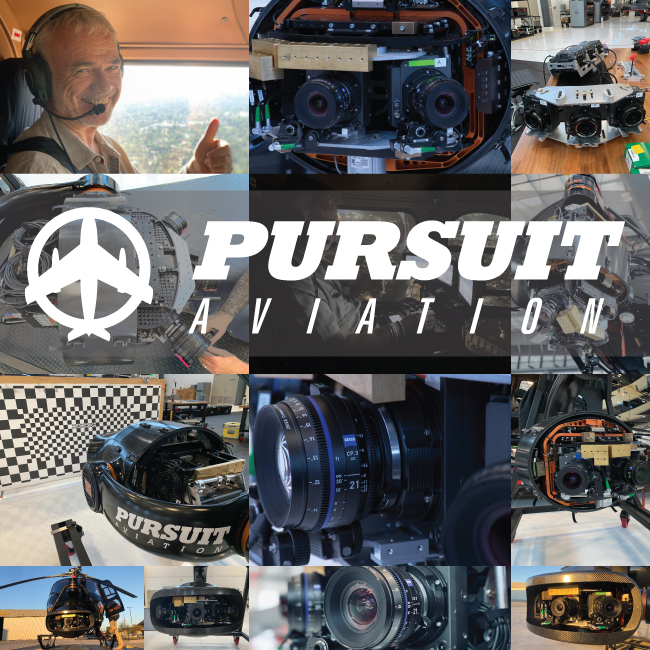 Offers up to 16K Resolution for Unmatched Low-light, VFX and Post-Production Capabilities

Pursuit Aviation modified the SHOTOVER gimbal to work with Sony VENICE cameras and paired them with ZEISS CP.3 lenses to deliver a field of view of up to 220 degrees for use with devices with aspect ratios of 20:9. Also, Pursuit Aviation developed a proprietary control system that for the first time allows a three Sony camera array to sync seamlessly together and deliver cinematic imagery of up to 16K resolution in post-production. By successfully configuring ZEISS lenses within the system to also capture Sony VENICE metadata, the system gives post-production a head start in the instant correction of elements otherwise completed manually. These smart sense features open up new possibilities, increased maneuverability, and potential time and cost savings to filmmakers.

"We are proud to introduce the latest in cutting-edge aerial film technology to the industry with our proprietary Hammerhead system which offers unmatched creative solutions for Sony VENICE filmmakers." said Steve Taylor, Managing Director for Pursuit Aviation. This project couldn't have been accomplished without the support of Sony, Stargate Studios, Radiant Images, Zeiss, Shotover and Semote. As the only company with the ability to now offer the innovative Hammerhead system at up to 16K resolution, Pursuit Aviation continues to shape the future of new possibilities in aerial cinematography.

The new proprietary Hammerhead technology is now available for television, movie and commercial shoots. In its first commercial use, the system is currently being employed in one of television's most popular big budget series. The popularity of the use of Sony VENICE cameras in productions led the Pursuit Aviation team to develop a system to provide unique advantages to both filmmakers employing aerial cinematography and VFX editors in the post-production stage.

Earlier this year Pursuit Aviation, along with its partner XM2, announced the creation of Whiskey Wheels, a first-of-its-kind setup inside a helicopter that delivers an entirely new way of shooting aerial scenes. The company also is responsible for another industry breakthrough with the development of JETCAM, the first mounted camera on an aerobatic jet aircraft capable of capturing stabilized images at speeds of more than 400 MPH.

Filmmakers interested in learning more about the new Hammerhead system and Pursuit Aviation's other innovations in aerial cinematography can find more information at www.PursuitAviation.com

Pursuit Aviation is a leading global aerial production company that delivers best-in-class aerial coordination and cinematography services to films, television and commercial productions. With a team of highly skilled and dedicated professionals with decades of experience in the industry, Pursuit Aviation offers a multitude of turnkey production, aerial and technical services from concept to completion and the ability to bring the most complex creative visions to life from the skies. For more information and to learn about our groundbreaking technical innovations in aerial cinematography, visit www.PursuitAviation.com.

XM2 are world leaders in drone-based aerial cinematography, catering to major motion pictures, visual effects and TV industries. With complete design, manufacture, build and operational capabilities, XM2 can operate in the most demanding technical and environmental locations around the world. For more information, visit www.XM2.com.