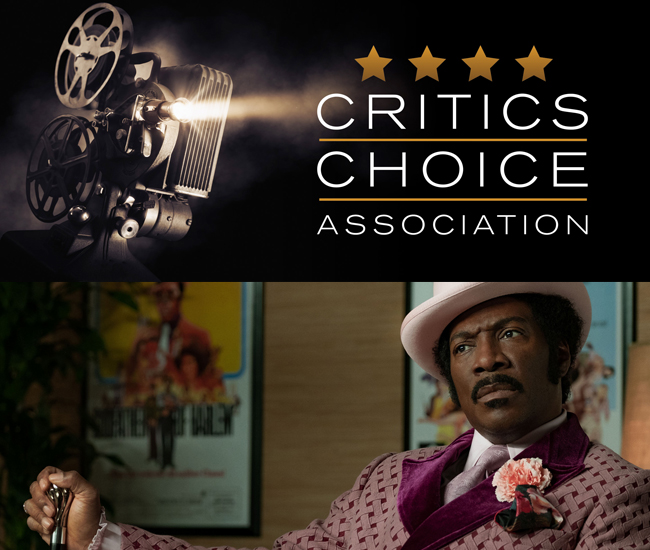 The Critics Choice Association (CCA) announced today that film icon Eddie Murphy will receive the Lifetime Achievement Award at the 25th Annual Critics' Choice Awards. Murphy will be feted for his extraordinary roles over the years, most recently his brilliant portrayal of the legendary Rudy Ray Moore in Netflix's Dolemite Is My Name, for which he is nominated for Best Actor.

The star-studded gala will once again be hosted by film, television, and stage star Taye Diggs, and broadcast live on The CW Television Network on Sunday, January 12, from 7:00 - 10:00 p.m. ET (delayed PT). As previously announced, Kristen Bell will receive the fourth annual #SeeHer Award during the ceremony.

Eddie Murphy is the most commercially successful African American actor in the history of the motion picture business and is one of the industry's top-five box-office performers overall. Murphy is on the very short list of actors who have starred in multiple $100 million pictures over the past three decades, from Beverly Hills Cop to Daddy Day Care. Some of his other most beloved hits include 48 Hours, Trading Places, Coming to America, Harlem Nights, The Distinguished Gentleman, Bowfinger, The Nutty Professor and Shrek.

Murphy can currently be seen portraying the legendary underground comic personality Rudy Ray Moore in Dolemite Is My Name from Netflix and recently wrapped production on Coming 2 America, the long-anticipated sequel to the 1988 box office hit.

In 2007, Murphy received critical acclaim for his portrayal of James "Thunder" Early in the DreamWorks film Dreamgirls, a performance which would garner him the Critics' Choice Award for Best Supporting Actor as well as earning him his first Academy Award® nomination in the same category.

Critics' Choice Awards are bestowed annually to honor the finest in cinematic and television achievement. Historically, they are the most-accurate predictor of Academy Award nominations.

The 25th annual Critics' Choice Awards show will be produced by Bob Bain Productions and Berlin Entertainment. The CCA is represented by Dan Black of Greenberg Traurig.

The Critics Choice Association is the largest critics organization in the United States and Canada, representing more than 400 television, radio and online critics. It was organized this year with the formal merger of the Broadcast Film Critics Association and the Broadcast Television Journalists Association, recognizing the blurring of the distinctions between film, television, and streaming content. For more information, visit: www.CriticsChoice.com.

THE CW TELEVISION NETWORK launched in 2006 as America's fifth broadcast network, with programming targeting younger viewers, a demographic highly sought after by advertisers. The CW, a joint venture between Warner Bros. Entertainment and CBS Corporation, broadcasts a six-night, 12-hour primetime lineup, Sunday through Friday. The CW's primetime programming is also available to stream for free, without authentication, on the ad-supported cwtv.com and The CW app, now available on every major OTT platform. In daytime, The CW broadcasts a Monday through Friday afternoon block, and a three-hour Saturday morning kids block. The CW's digital network, CW Seed, launched in 2013, and offers original short-form digital content as well as past seasons of fan-favorite television series. For more information about the network and its programming, visit www.cwtvpr.com.