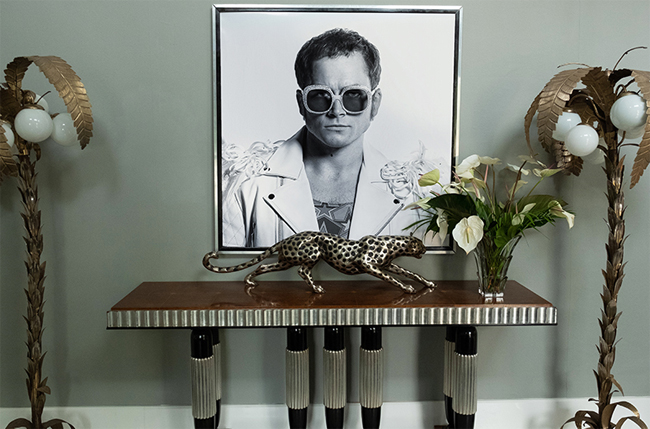 "This movie is about when I started to become famous...
It was an extraordinary and surreal time, and that's how I wanted the film to be."
--Elton John

It should come as no surprise that conventional movie making was never going to work for the telling of Elton John's life story - it simply could not contain it.

Elton's transformation from the shy, working-class piano prodigy Reginald Dwight into a global music superstar was as tempestuous, outrageous, and plain dangerous as it was inspirational and brave. No regular movie was ever going to do it justice. -Paramount Pictures

"The idea," says Director Dexter Fletcher, "was to create something that would genuinely explode off the screen, a riotous joy-ride of imagination, celebration and drama." He chose Production Designer Marcus Rowland and Set Decorator Judy [Jude] Farr SDSA International to literally set the scene(s)!

They toured Elton John's Windsor house and met with him early on re: the look of the film, as he was not only the subject but also one of the producers, along with his husband David Furnish. Farr was impressed with the icon's openness to their creativity, his preference that they not religiously re-create his environs, but "surprise" him with their interpretations. The fact that the film was not to be a straight-up bio, but a mix of chronological depictions and musical numbers that conveyed more emotions than geography meant the team could be true to both aspects of his life, and always true to his personal story.

The LA mansion portrays his life of excess and deep need. Actually filmed at an estate outside of London, Farr was able to convey the Hollywood glamor and emptiness of the moment, while giving a nod to John's sense of humor and mischief, a delicious aspect she included throughout the film!

Her sense of whimsy and wide perspective has allowed her to build a network of what she refers to as "mad collectors" of vintage items. When you look at the scope of films and television she's done, [Oscar and Emmy nominated]...from THE KING'S SPEECH and DOWNTON ABBEY to MY WEEK WITH MARILYN* and FIRST THEY KILLED MY FATHER to CONAN THE BARBARIAN and OUTLAW KING*, and ever so much more...you realize the variety of elements she has brought to the screen in all of this visual storytelling.

This story is told in vibrant song and sets, as described by Paramount Pictures studio:
"As the film follows Elton [Taron Egerton] from his English hometown of Pinner and along the Yellow Brick road of fame, addiction and heartbreak, we meet the mother he had a troubled relationship with [Bryce Dallas Howard], the grandmother [Gemma Jones] who tried to nurture his talent, his increasingly overbearing manager and onetime lover, John Reid [Richard Madden], and his legendary lyricist Bernie Taupin [Jamie Bell], the best friend and creative partner of over 50 years without whom John might not have survived."

As Elton, who gave the cast and crew of ROCKETMAN free reign to tell his story, says:
My life has been pretty crazy. The lows were very low, the highs were very high. Unfortunately, there wasn't much balance in between."

Co-Producer Furnish knew from the beginning that John was interested in telling a fantasy version of his life, something that was larger than life, not as it happened exactly, but as the fantastical version of what might have taken place. "And that was our starting point for the film that we wanted to make."

Thus, while Elton's childhood home has that beiged-down vintage realism [and an opportunity to use truly vintage wallpaper and fabrics!]...and there is a sublime re-creation of Mama Cass's Laurel Canyon house [filmed not in the Hollywood or Malibu area, but entirely built & furnished in the UK]...the fantastical is evident in the Versace-esque offices for John Reid [not period-correct, Farr will point out, but the director wished to do an homage to Elton's friend] and totally realized in the Honkey Cat sets for increasingly over-the-top numbers John was compelled to create as his fame grew.

There are a huge number of sets, from the local pub to posh London eateries, a range of offices and homes, private jet plane to crowded dressing rooms, and, of course, the stage shows, from The Troubadour to Dodger Stadium!

See the photo gallery above...and then see the film again - your initial appreciation will increase ten-fold!

Not only do your favorite songs come alive, the sets will help make even the most flamboyant seem real...