At the close of ICG's "Landing the Gig and Building a Career" panel discussion, Karl Kresser, President of Cine Gear Expo, and Juliane Grosso, Director, came to the stage to honor Steven Poster's final appearance at the show on behalf of the International Cinematographers Guild. It was a historic moment. Kresser thanked Steven for his years of service to the industry on behalf of the Guild, for his unwavering support of the filmmaking crafts, and for helping make the Cine Gear Expo the success that it is. 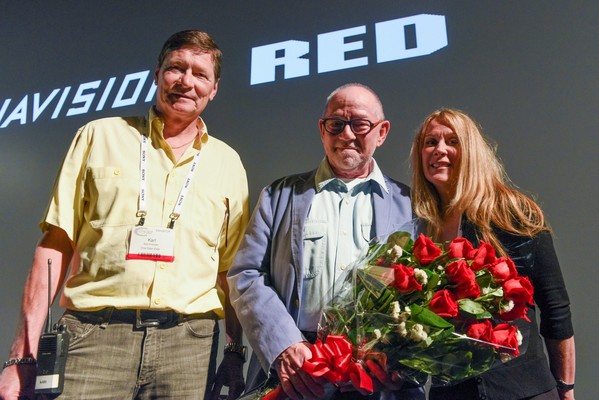 ABOUT CINE GEAR EXPO: For the full list of exhibits, seminars, panels, and directions, visit www.cinegearexpo.com

ABOUT THE INTERNATIONAL CINEMATOGRAPHERS GUILD (ICG): The International Cinematographers Guild (IATSE Local 600) represents approximately 9,000 members who work in film, television and commercials as Directors of Photography, Camera Operators, Visual Effects Supervisors, Still Photographers, Camera Assistants, Film Loaders, all members of camera crews and Publicists. The first cinematographers' union was established in New York in 1926, followed by unions in Los Angeles and Chicago, but it wasn't until 1996 that Local 600 was born as a national guild. ICG's ongoing activities include the Emerging Cinematographer Awards and the Publicists Awards Luncheon. The Guild also publishes the award-winning ICG Magazine.