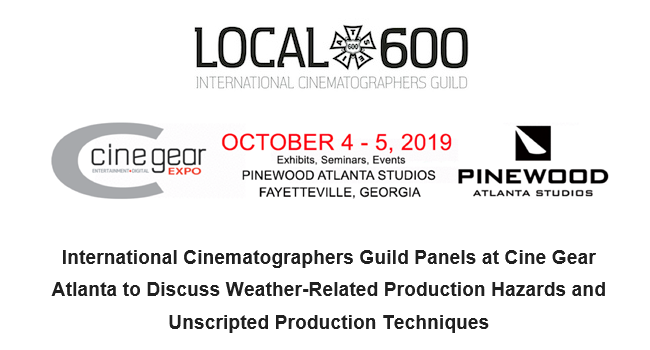 The first, to be held on Friday, October 4 at 2 pm in the Workshop, Pinewood Atlanta Studios, Fayetteville, Georgia, will address the importance of working safely in the Southeast with its increasing weather dangers. The panel is entitled Tornados, Hurricanes, Floods, Lightning, Heat and Ice - Working Safely in the Southeast.

Crews working in the Southeast face nearly every weather hazard imaginable. The discussion will center on what contingency plans should be in place to ensure everyone returns home safely.

ICG's National President, Lewis Rothenberg notes, "The Sarah Jones tragedy five years ago has taught the industry that crews must be empowered to be safe on the set and employers must be accountable for safety at all times in all forms - and that includes unpredictable weather. The ICG is proud to join its sister Local and the IATSE in bringing the latest in safety information to the production community."

The second panel, scheduled for Saturday, October 5 at 11 am in the same venue, is titled By the Seat of Their Pants - How Unscripted Camera Teams Score the Shots. Leaders in the field will discuss how they develop their instincts and sharpen their skills to extemporaneously choreograph compelling stories in real time.

Michael Chambliss will moderate Camera Assistant Jessica Grizzell and Camera Operators Brian Hall, Chris Flores and Rey Miranda as they pull back the curtain on this highly specialized area of production.

ABOUT THE INTERNATIONAL CINEMATOGRAPHERS GUILD (ICG, Local 600): The International Cinematographers Guild (IATSE Local 600) represents approximately 9,000 members who work in film, television and commercials as directors of photography, camera operators, digital imaging technicians, visual effects supervisors, still photographers, camera assistants, film loaders, all members of camera crews and publicists. The first cinematographers' union was established in New York in 1926, followed by unions in Los Angeles and Chicago, but it wasn't until 1996 that Local 600 was born as a national guild. ICG's ongoing activities include the Emerging Cinematographer Awards and the Publicists Awards Luncheon. The Guild also publishes the award-winning ICG Magazine.